John James McKenzie arrived in Edmonton in 1886 where he first worked as a ferry hand for John Walter. With the coming of the Calgary and Edmonton (C & E) Railway and the creation of the town site of south Edmonton in 1891, he established a blacksmith shop and by 1899 he had expanded his business activities to include a farm implements dealership. In addition to his role as a businessman, he was also involved in other aspects of community life in Strathcona. During the 1890s he served on the Strathcona Public School Board and in 1894 he was a member of the building committee of Knox Presbyterian Church. Following the incorporation of Strathcona in 1899, he went into municipal politics serving on the town council in 1899, 1902, 1903 and 1906 and on the City of Strathcona Council in 1907. He served as mayor of the town in 1904. Following the amalgamation of Edmonton and Strathcona in 1912 he continued his involvement in education and municipal politics by serving on the Edmonton School Board from 1912 to 1921 and as an alderman from 1920 to 1921.

The residence was constructed for J.J. McKenzie in 1907 at the height of his success as a Strathcona businessman and municipal politician. Its construction occurred during a period of rapid expansion in the history of Strathcona. Architecturally, the McKenzie Residence is an elaborate version of the Canadian foursquare style. This Georgian inspired style was popular in Western Canada from the 1890s to the 1920s. 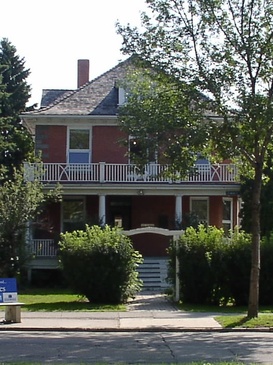