(now known as the Milner Building)

The Northwest Utilities Building (now the Milner Building) is a hybrid example of the International Style inspired by Le Corbusier, with its raised podium and the Structural Expressionist style of the tower. The perimeter columns, clad in stone, are emphatically pronounced. The exterior of the tower is not a true curtain wall but a hybrid design, maintaining many of the principles of International Style towers but retaining significant visual solidity. This building is not as unabashedly ‘modern’  as the earlier Rule Wynn and Rule AGT Building on the Legislature grounds with its innovative curtain wall cladding that produces a much lighter appearance. This building was innovative in many ways: it was the tallest office building in the capital, the first building in Alberta to use styrofoam insulation, and also featured an automatic sprinkler system. An off-set two-storey podium completes the modern composition that includes a recessed garden at street level. The podium is designed as a “floating” box clad in limestone on prominent black granite columns, providing a ground-level covered walkway with storefronts recessed from the facade. The box acts as a frame for tall, adjustable sun louvers that face east. The vertical louvers, a direct International Style influcence, were not an uncommon element in 1950s Edmonton architecture, and could be seen in the 1957 Edmonton City Hall, the International Airport and a few other buildings from the period. 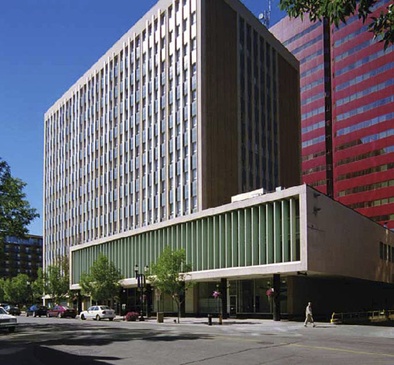 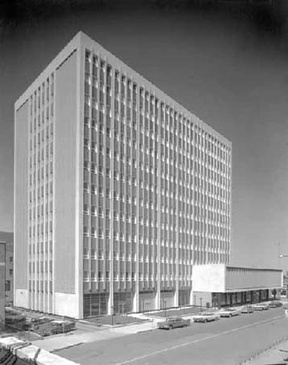