The beginnings of Edmonton, Fort Edmonton (also named Edmonton House), was the name of a series of trading posts of the Hudson's Bay Company from 1795 to 1891, all of which were located in central Alberta. From 1795 to 1821 it was paired with the North West Company's Fort Augustus.

The fifth and final Fort Edmonton was built in 1830 by Chief Factor John Rowand and evolved into the present-day city. The old fort has since been recreated at Fort Edmonton Park.

In the 1800s, every respectable European gentleman sported a shiny felt top hat. These hats were a status symbol, the height of fashion, and luckily for Edmonton, made from beaver pelts. It was this demand for beaver pelts that prompted the Hudson's Bay Company to establish a trading post called Edmonton House in 1795. The sole purpose of the post was to trade European goods to the local Cree, Blackfoot and other Aboriginal people in exchange for valuable beaver pelts.

By 1846, Fort Edmonton was the most important Hudson's Bay Company post west of the Red River Settlement at Fort Garry (near modern Winnipeg). The Fort not only traded furs, but produced goods and supplied other smaller posts. The population of Edmonton House varied according to the season, but generally visitors could find approximately 110 men, women and children taking residence.

Because of the extensive disturbance to the Legislature grounds since the fort was dismantled, shallow building remains were nearly all destroyed. All that remain are cellars, privies, and the footer trenches for the fort palisades. If you walk out behind the lawn bowling club house on the west side near the roadway, there is a slight depression in the road where the remains of a large cellar from the west warehouse were uncovered. Other wood remains related to this warehouse were also identified near the club house. They represent the wood building foundations that once supported these very large warehouses, which later became telephone offices for the City of Edmonton.

From this vantage point, look up toward the east annex of the Legislature Building. Chief Factor Richard Hardisty built his new Big House in approximately 1874 somewhere near this spot. This move outside of the protection of the fort walls was quite remarkable for the time period, since tensions between the traders and Native groups still occasionally occurred. It is uncertain whether any archaeological remains are preserved from these buildings or activities, due to their close proximity to the Legislature Building.

"History just below the surface" by Lawrence Herzog 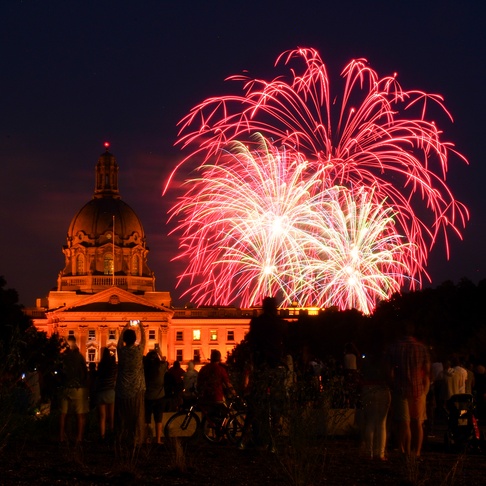 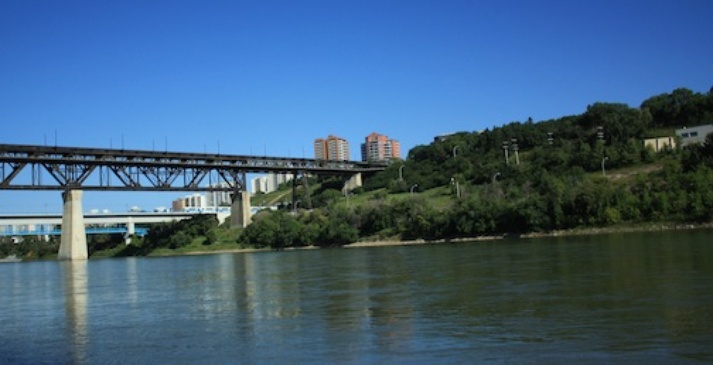 site of Fort Edmonton, 2012. View of from the Walterdale Flats riverfront.

site of Fort Edmonton, 2012. View of from the Walterdale bridge.

site of Fort Edmonton, 2012. View of from Laurence Decore Lookout