The Oliver Building is a straightforward office building created in the Early Modern style. The massing of the building is rectilinear with a horizontal emphasis. It is designed to appear as a ‘floating’ box on a low podium.  The elevations are framed in Tyndall stone, which has also been used to create strong vertical separations between the horizontal bands of windows. A distinguishing feature is the exterior use of ceramic mosaic tile above and below the windows. The mosaic patterns were designed by McKernan and Bouey, and were sent to England where the tiling was created in sheets. A creamy orange coloured brick has been used to create solid walls at the ends of the building. Provisions were made in the structural design for two additional stories to be built if necessary. A structurally expressive, poured-in-place concrete canopy, visually separated from the building with skylight, covers the main entrance doors. 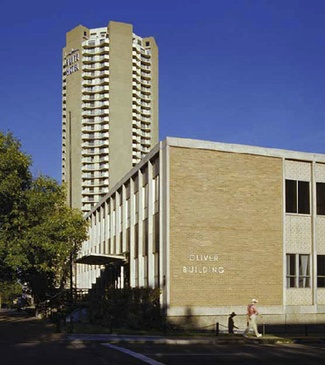