This residence is typical of housing built in the Mill Creek area of Strathcona in the pre-First World War boom period. It was built in 1913 by James Turner, one of the most prolific builders in the area. Turner built a number of houses on 92 and 93 Avenues at this time to meet the demand for housing in the growing city.

The house was sold to Reginald G. J. Smith in 1914. Smith worked first as a reporter for the Edmonton Journal, then as a printer. From the late 1910s through to the 1960s the house was occupied by a wide variety of people including a railway engineer, a managing director of furniture company and an accountant, but for most of these years it was home to a widow named Mrs. Winifred Fairley. Little is known of these later residents but they reflect a cross section of people who chose to live in the Mill Creek area in this period.

The heritage value of this residence lies primarily in its representation of a typical middle class residential property built at the end of Edmonton and Strathcona’s initial boom period. It is also a good example of the modest, simplified Craftsman style that was popular with Edmonton home buyers at the time. The front porch and a number of construction materials and details are original to Turner’s 1913 construction and the house retains much of its initial character and configuration. Together with other residences on the block it offers a sense of the residential streetscape of a pre-1914 Edmonton neighbourhood. 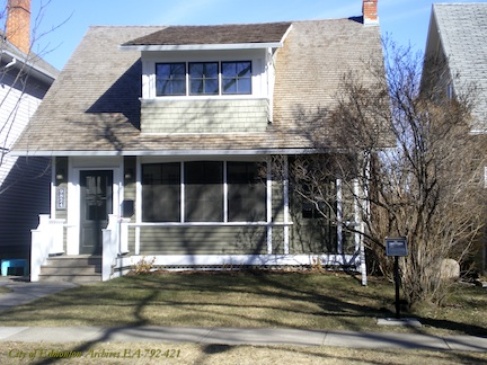 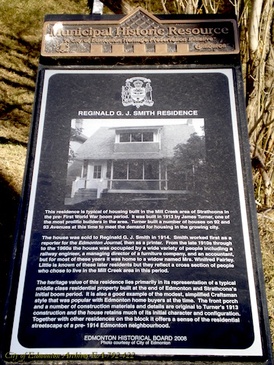