Richard Foote arrived in Edmonton at just the right time. A building boom began after 1903 and the young bricklayer went to work on the Alberta Hotel on Jasper Avenue. Later, as a contractor, he led the construction of Edmonton’s Civic Block, St. Mary’s High School, Athabasca Hall at the University of Alberta, as well as the psychiatric hospital at Ponoka. Married twice with seven children, Foote served as an alderman from 1934 to 1936, and then worked as an assistant city building inspector, retiring four years before his death in 1948.

Foote built this Foursquare residence in 1907, and moved into it one year later. The overhanging eaves, open veranda, square columns, and symmetrical design typify the Prairie-style architecture of the era. Unique to Foote’s design are the dormers and widow’s walk on top of the pressed sheet metal bell cast roof that flares out at the bottom, and the ground floor level brick banding, or rustication. Notice the multiple paned bay windows: a distinctive front-facing one, and on the south side, one with a subtle curve.

The grand proportions and attention to detail suited the entrepreneurs and professionals who moved here after Edmonton became the provincial capital. Amid the older working-class neighbourhoods of the river flats, the Foote Residence provided an anchor for a new upscale district around the Alberta Legislature grounds.

Provincial bacteriologist, Dr. Daniel G. Revell and his family also lived here for a time. The Edmonton Journal reported that Revell was a teacher, physician, research scientist and author who “cooperated with the police in Saskatchewan and Alberta in the scientific solving of mysteries.”

It would take someone other than Revell to solve one of this home’s mysteries. Rumour has it that the Baron Renfrew – Edward, Prince of Wales – played piano for party guests here on September 13, 1919 after attending a baseball game earlier that day in Diamond Park, thereafter renamed Renfrew Park in his honour. Or so the story goes.

"The Buildings of Richard Foote" By Lawrence Herzog 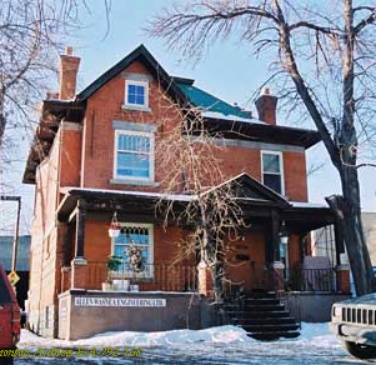 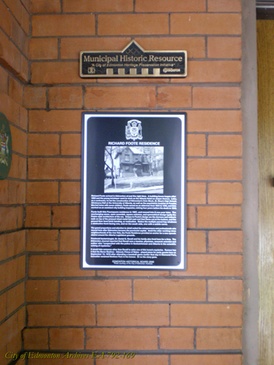