The official opening of the A.H. Richards and Company general store on March 12, 1910 was conducted with style. Special discounts were offered on all items in the store, and an orchestra was in attendance for much of the day. The store, located on the ground floor of the Richards Block, sold a wide range of goods, including clothing, household items, and groceries. Originally, the upper floors housed offices and meeting rooms, but after 1925 these were converted to apartments.

The Richards family had come to Strathcona in 1893 and were among its earliest merchants. A.H. Richards served as a town councillor in 1906, and his son Thomas was, for some time, Strathcona's only contractor. It was a measure of their success in the community that they could construct such a substantial building at the then considerable cost of $30,000. Small wonder they put on such a show for its opening.

The Richards Block is very solidly built, the foundation walls being two feet thick and the superstructure containing steel reinforcement. Classical details embellish the facade and give it a distinguished appearance. The ground level was originally faced in regularly coursed, rusticated sandstone with decorative urns in the same material placed at each end. The two upper floors are finished with brick that has been laid to imitate coursed stone. Four pilasters included in the fancy brickwork pierce through a wide cornice to reach the top of the height-enhancing parapet. Taken together these details created a pleasing, balanced effect typical of Edwardian commercial buildings. 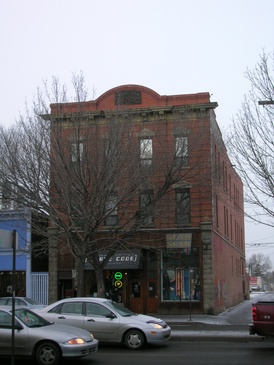