Designed by school board architect George E. Turner and built by the board’s preferred contractor team of George Pheasey and C.C. Batson, the three-storey brick school was well sited, but the location turned out to be somewhat unfavourable. Built atop a slough, the school was quickly plagued with the problem of a sinking basement. Teams jacked up the building three times to deal with the issue, and that first year, the basement was often filled with water, and unusable. As the only large building in the area, Ritchie School became a preferred community centre, and functions such as teas and club gatherings were popular. Operettas were also well attended.

More about Robert Ritchie on the Mount Pleasant Cemetery page

I just read that the school will be torn down to build a new Catholic junior high for the Greater North Central francophone Education Region. Portions of the old section will be salvaged. What a shame!!!!

Myself and 2 generations before me attended Ritchie School. It would be real shame to see this wonderful historic building torn down. Why can't they do a complete renovation like they do with other historic buildings.

I drove by my old Jr high RITCHIE and was sad to see it all boarded up. I pulled over and searched on google and saw it was slated to close due to poor attendence in 2008. Then looked over to see it is now a French school. Now they want to tear down the beautiful old section. What is wrong with canada that they will spend millions on on silly art projects (metal balls) and elevator stairs. But to save a land mark a peice of history is just too hard. Why can't we build something that lasts more than 20 years. We need to look to Europe for inspiration. In 200 years we will have no national historical land marks at least in the West.

Do not destroy history. Keep the old building. It’s our heritage. I agree with the last comment, what if they did this in Europe. Let’s get rid of the Tower of London, the Roman coliseum, the Sophia Hagia. Yes, Ritchie school is not those, but it’s Edmonton’s equivalent in a way.

Went there in 1963 the 50th anniversary. It’s a shame to see such a beautiful old building replaced with some ugly modern day building

My sister, two brothers, my wife, my sister-in-law, my business partners wife all students at Ritchie. None of these are included in the number of other friends that were there at the same time that I was '73-'75. It will be a shame to see the old building go. Strip the insides to the brick and wire to todays standards, why tear down existing bricks and mortar.

I attend the school and I might be in the new school that they are building. The school is not safe because there meterials used in there that could give you cancer. It is a shame to see such beuty go away but the new school that they are building will help us, The students and our futures. I understand your sadness regarding this matter but, the area will be put to good use.

Obsolete ! Really! So are the many many students who attended there . Several generations of my family have memories of being students there. How did the R>C school board get access to public school property !!!!! The greed and averice displayed in the destruction of older buildings like Ritchie School shows us how little respect is given to Edmontons history. Pathetic!!!!!!!!

I attended classes in the original building 1972 -1974, it is a shameful but not surprising, that this city would allow such a historical building to be demolished. We will once again lose another piece of our past. I have many memories of my time there (if the walls could talk the stories they would tell). I was fortunate to attend the 95 year reunion in 2008 and took pictures inside this beautiful building full of original architecture. The image is of the oak and metal railings on the staircases. 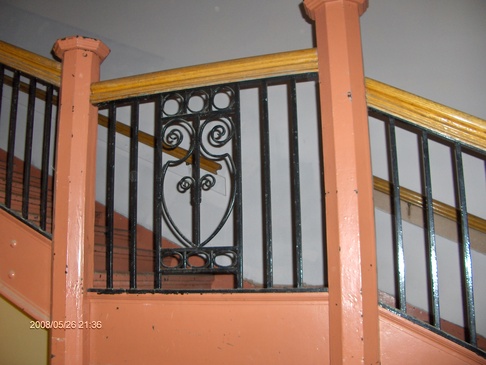 My mother and 5 siblings, my father and 8 siblings attended Ritchie school in the 1930s to the late 1950s. I attended junior high there in the 1960s. Both families lived there from the 1920s to 2005. It is very sad to see such a beautiful building go. Edmonton is letting go of many historic buildings losing much character of the city. Sad.

A beautiful School, I attended close to fifty years ago. I remember sliding down the banisters during class change. Wooden floors, never hot and stuffy during hot weather, the windows. So glad I had the chance of attending. My three daughters also went to Ritchie but at that time the old building had been closed off. My one Daughter said she always wished that they would have given a tour of the old girl. so sad to learn she will be torn down.

Image inside one of the class rooms on the 2nd floor. 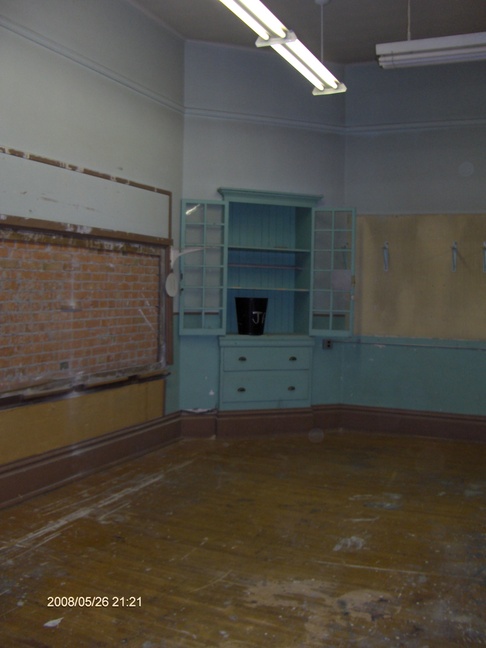 I personally did not attend nor get to seem the halls of this building but worked on gas line replacements for the area in 2014 and was thoroughly impressed by the old architecture of this building and I kept saying to my co workers I sure hope they never tear this one down. Then I drove by it on my way to work two nights ago and thought to myself where is the school only to realize its been removed what a big history mistake wow so sad!I did not know about the decision to tear itmdown otherwise I would have tried to see inside it on the june 27 open house darn!

Is there any information on what happened to the yearbooks or class lists? The epsb achieves don't seem to have them?

I know there are many of you out there but, HEY! I attend this school (right now while waiting for the new one to be finished) and I ABSOLUTELY agree that it should be demolished. No one is allowed to go upstairs. The bathroom lighting is horrible. The cafeteria (old gym) is too small and the ceilings are cracked. I know all of you might be saying that heritage will be lost but think about the future generations! (They are building the new one BESIDE the old one). (By the way, maybe they should keep it)

Such a shame. Iived in Edmonton in the 60's stayed at rosary hall. A beautiful in and out building. Years later received a written accounting I received that had the history back when people lined up with tin for food and hunger existed. It has much history of Edmonton. I believe I got it from the sisters of Providence from back east. I hope the rosary hall will be saved. I am on fb., Leila Gavin, former Leila Kilkus. I would like to surrender to group that will preserve. Written it was by Sister Faustina. I know it has been sold. I believe Rosary Hall should be saved. The history of this building and building hold beauty. Thank you.

me and my brother attended this school in the late 1940 early 1950 .my mother was a janitor at the school emily may perrier. it would be a shame to tear it down. i hope they havent done it allready.

Well, it's official. The demolition started today and the school will soon join the long list historic buildings erased from Edmonton's built heritage. Let's just tear everything down, shall we? Nothing over 20 years old shall be allowed to stand. Shaking my head, yet again...

Does anyone have any pictures of the inside ? I’m curious as to what it looked like

I used to live in Ft Sask...moved to YYC in 96 and I take photos of historic places now. Unfortunate I was late on this one :( Edmonton doesn't hold their historic places as much as Calgary does. It's a shame to see. You can keep it and make them safe in their olden ages.

I’m curious to which gym was too small? All I ever remember was the wrestling room next to IE in the 90-93 years which was for weights and wrestling. We never had a cafeteria so consider yourself lucky. We used a science lab as our lunch room! They had added a gym with showers many years ago after the fire In home economics in the 70s that made the second floor not useable. Industrial Ed, library and home ec (2nd floor) went into the addition built back in the 70s which is where the old gym from the original school was. A new gym and more science facilities was constructed. Drama room was constructed in the old entrances to the old school where they joined to seal it off from the rest of the school. Ritchies enrollment was strong in my grade 7 year in 1990 (4-5 class rotation groups per grade) but died once millwoods which a lot of kids bussed from was built. By time I got to grade 9, classes had already shrunk to two class rotations. The old school part was used by archives and maintenance. It was utilized when I was attending by EPSB. Students where not allowed in that building when I attended. It’s truly sad that they never got around to repairs. Fire was in 74 and you would think EPSB could have fixed it over time instead they used the first and third floors for other things not teaching related as they was still useable for other purposes like storage. Some kids did manage to get a peak at what was inside and it was mostly tools and parts. 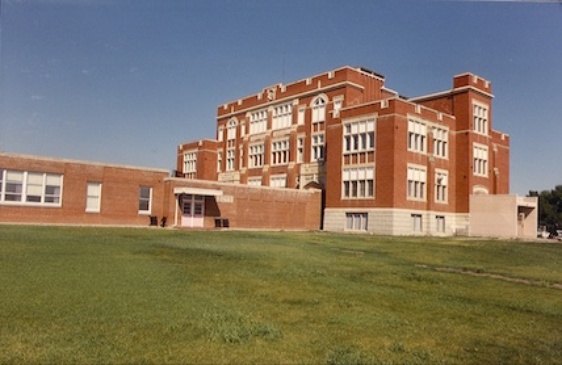 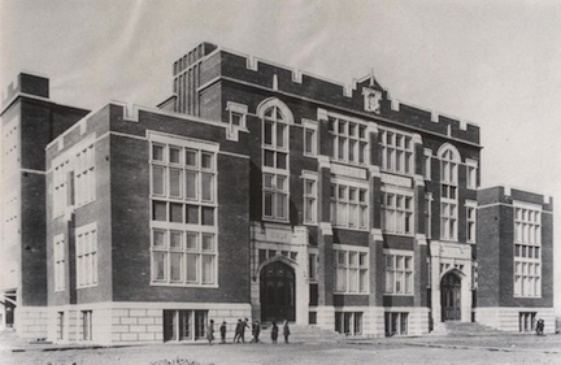 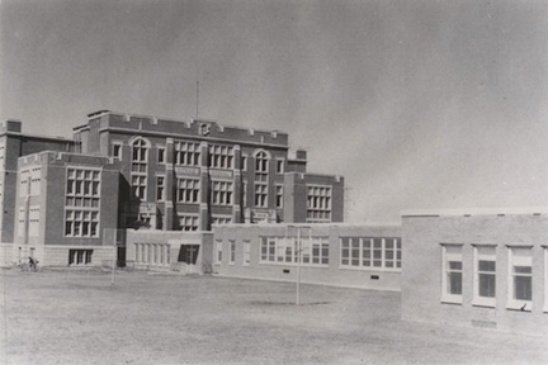