Robertson Presbyterian Church was built in 1913 at the very end of the Edmonton building boom, and opened in early 1914 on the eve of “the Great War”.  Its High Victorian Gothic Revival architecture, inspired by First Baptist Church in Calgary, reflected a period of optimistic growth, and was typical of many similar large brick religious edifices at that time.  Named for Reverend James Robertson, Superintendent of Missions for Manitoba and the North West Territories from 1881 to 1902, it proudly commemorated the history of church endeavor in Western Canada.

Robertson Presbyterian became a United Church following Union in 1925, and merged congregations with Wesley United Church in 1971.  Wesley Methodist Church, the fourth Methodist congregation on the North Side, had been active in the west end since 1907; Robertson Presbyterian, also the fourth such congregation on the North Side, had begun services in the west end in 1909.  Both churches reflected the growth in their areas during the pre-war building boom.

The large brick Wesley Methodist Sunday School served its congregation from 1913 to 1970 at 117 Street and 102 Avenue (17 Street and Athabasca Avenue when it opened).  The Memorial Hall at Robertson – Wesley commemorates the sacrifice made by the Church during the Second World War; 297 enlisted and 28 died in the service of the country. 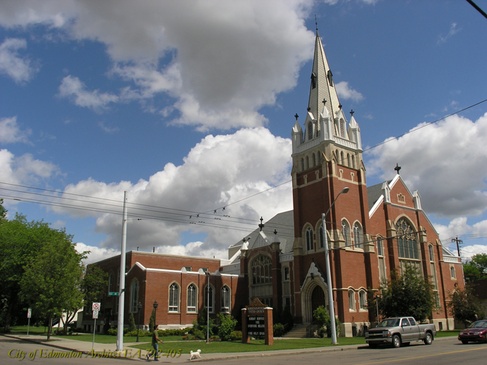 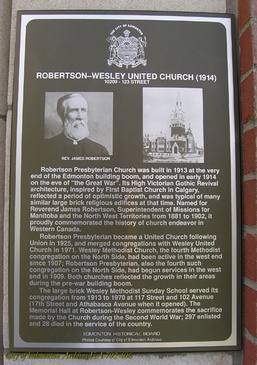