Constructed in 1894, the Ross Block was one of the first brick buildings on Whyte Avenue, and is now the oldest such structure remaining. Originally, the Ross Block functioned as Strathcona's first hardware, plumbing and tinsmithing business, but after 1897 when its namesake W.E. Ross acquired it, many other uses were found for the building. The upper floor became Ross Hall, and served as Strathcona's first meeting hall and cultural centre. Touring art exhibits and theatrical productions also took place here. Later, the hall accommodated Edmonton's Masonic Lodge and finally was converted into apartments. Over the years the lower floor was variously a feed store, a restaurant, a clothing store and a nightclub.

The most common building material in early Strathcona was wood. The Ross Block predates the widespread use of brick in the area by about ten years. Another unusual and, for the period, extravagant feature of the building was the very large panes of glass in the arched openings of the street facade. Clearly, this was intended to be a distinctive building. The corbelled parapet, round-headed second floor windows, and massive arches on the ground level suggest the influence of the Richardsonian Romanesque style in the design of this building. 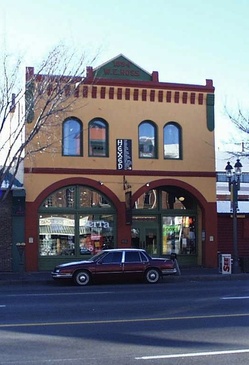