The Ross Residence was constructed from 1913 to 1914 for architect Ernest William Morehouse. Morehouse designed a number of commercial buildings in Edmonton including Barton, Williamson and the Crafts and Lee Buildings, the St. Laurence Apartments and the New Westminster Rooms. He was also responsible for the design of a number of homes in the Highlands district, a new subdivision in east Edmonton intended by its promoters to be an exclusive residential neighbourhood. Morehouse was retained by the firm of Magrath Holgate to design a number of homes that they anticipated constructing in the area. Only four residences were completed for them before economic recession and World War One brought the development envisaged by Magrath Holgate to an abrupt end. These included the house of W.J. Magrath and Bidwell Holgate, and provided the neighbourhood context for Morehouse's own residence. Morehouse also designed the Methodist Church constructed in the Highlands and another Methodist Church at Athabasca.

Morehouse was an active community member serving on the Board of Highlands Methodist Church and the city hospital board. He was also an active member of the Alberta Association of Architects, holding the position of Vice President in 1921. Both Morehouse and his house were obviously closely associated with the city building process in Edmonton during the major period of expansion before World War One, and in the city's consolidation thereafter. Following the departure of Morehouse from the residence in 1922, it was occupied by a number of people including prominent lawyer James G. Ross.

The Ross Residence was modeled after Georgian Revival residential designs that were popular across Canada and the U.S. from the 1880s until about 1915. Characteristics of this classically derived style which are evident in the house include the broad eaves overhang with brackets under the eaves, a central doorway, a veranda supported by twin boxed columns and a tall decorated chimney stack. 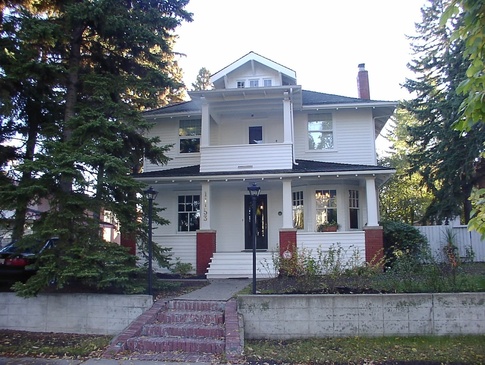