In 1806, Marie-Anne Gaboury married the Hudson’s Bay Company voyageur and fur trader Jean-Baptiste Lagimodière upon his return to their hometown in Lower Canada, but refused to stay behind when he returned to the Northwest. This was very unusual at the time, as no French-Canadian woman was known to have ever been west of the Great Lakes, but accompany him she did. At first, they were sent to a post in present-day North Dakota, but by 1807, the Hudson’s Bay Company posted Lagimodière to Fort Edmonton and Anne-Marie followed with the couple’s first child. From time to time she stayed at Fort Edmonton while her husband was away, but often she went with him on hunting trips and trapping forays.

During the summer of 1808, they were traveling near the Battle River when her horse, a lively buffalo hunter, came upon a small herd of buffalo and took chase as it was trained to do. Marie-Anne was then in a very advanced state of pregnancy and had her toddler beside her on the saddle. Her husband finally managed to catch the runaway horse and stop it, but Marie-Anne went into labour that evening and delivered a boy, who was named Jean-Baptiste, but always called “La Prairie” in remembrance the wild ride that led to his birth. The couple was in the Edmonton region until 1811. Marie-Anne Gaboury is also known as the grandmother of Louis Riel, who was the son of her daughter, Julie.

In 1988, through the initiative of the youth group, Francophonie jeunesse de l’Alberta, a short stretch of 91 Street north of Whyte Avenue was named Rue Marie-Anne Gaboury.  All along the street, a series of brick pillars with interpretative panels relate the history of the Francophone community in Edmonton, including Marie-Anne’s time here. 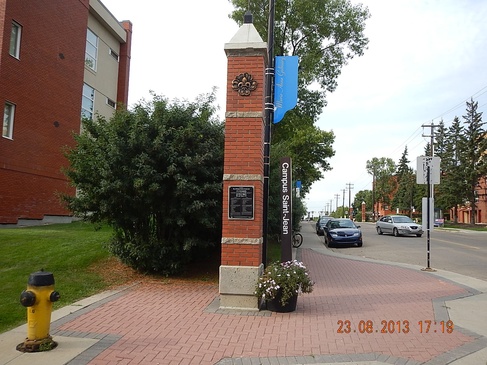