Though today it is known primarily as “Edmonton’s First Nations, Metis and Inuit parish”, Sacred Heart Church has also been an important place for Latin Americans living in Edmonton.  Notably, in the 1970s and 1980s this Church was the site of a number of protests.  For example, in 1984 a large number of Latin Americans held a 24-hour fast at the Church.  The fast began in the morning with a small number of Chileans who gathered at the Church to fast and pray in response to worldwide call from the archbishop of the Chilean capital for a day of fasting and prayer.  The archbishop’s call came after then dictator Augusto Pinochet had declared a state of siege.  By early evening a large number of Edmonton’s Latin American community had gathered in solidarity at the Church.  Today the Salvadorian community hosts regular pupusa sales in the basement of the Church.

Over the years many immigrants and refugees who came from across the world to settle in Edmonton made Sacred Heart Church their spiritual home.  In addition to being a welcoming and safe place for political activism, Sacred Heart Church also led the way for many cultural groups in Edmonton to build their own Churches, including the Latin American parish Nuestra Señora de Guadalupe. 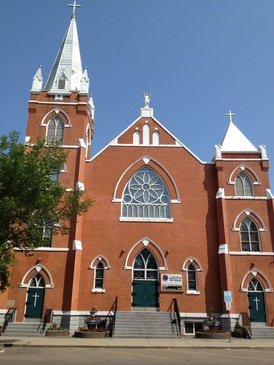