Edmonton’s Italian community did not have a parish until 1958 when Santa Maria Goretti (SMG) Roman Catholic Church was built. Previously, Mass was said in Italian by Salesian priest Father Luigi at the General Hospital Chapel. When more space was required as a result of the post-war boom in immigration, the community was allowed to say Mass in the basement of Sacred Heart Church. Archbishop Anthony Jordan arranged for two priests, Fathers Rino Ziliotto and Giovanni Bonelli, members of the Missionary order of St. Charles (Scalabrians), to come to Edmonton and they arrived in December, 1957. A committee of volunteers including Enrico Butti, Angelo Biassuto and others proceeded to look for a site and to initiate fundraising. The location of the Church was quickly decided when the Cristoforo Colombo Soccer Society offered the land given to them in trust by the City of Edmonton next to Clarke Stadium at 110 Avenue and 90 Street. Two saints’ names were given to the Archbishop – Saint Cecilia and Santa Maria Goretti – and he decided on the latter because he believed she was a “saint of our days.” The church, a wooden truss and stucco construction, opened on December 21, 1958. A small rectory was built and a church-hall extension. These facilities became the heart of Little Italy. Father Augusto Feccia was interested in documenting the community’s history to commemorate the 25th anniversary of the Church and, in 1983, established the Italians Settle in Edmonton Historical Society. President Frank Sdao and lead researcher Adriana (Albi) Davies saw that oral history interviews were done, an exhibit developed and commemorative booklet published. The church has undergone several renovations and the exterior was redesigned to reflect the style of Italian parish churches. From 1984 to 1986, the SMG Community Centre was built at a cost of $2 million as well as a new rectory. Fundraising was led by Father Feccia, Frank Cairo, Rudy Cavaliere, Carlo Amodio, Agostino Annicchiarico, Carmen Naccarato and Mario Scrivano. The Sunday pranzo (dinner served at noon) has become a tradition for many and, today, Santa Maria Goretti is a 1,600 family, city-wide Parish. 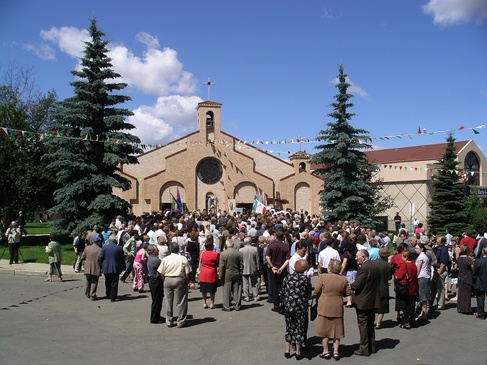 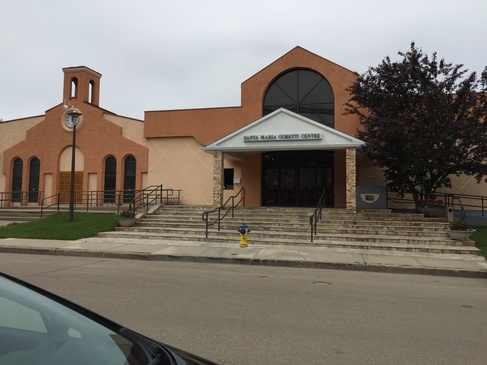 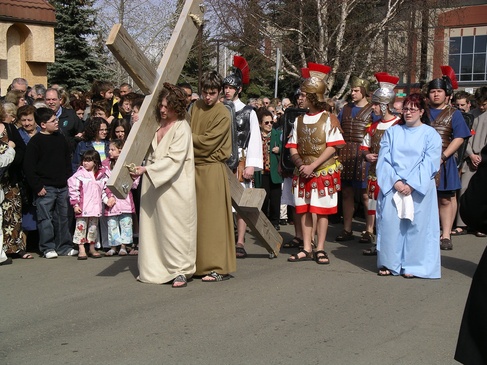 The Carrying of the Cross on Good Friday at the Santa Maria Goretti Church in Little Italy, 2004. Photo by E. R. Cavaliere.