This two storey rectangular brick building was opened in 1912 and cost owner Otto Edinger $40,000 to build with an additional $8,000 in machinery for the garage.  The local newspaper, News-Plaindealer, noted, “the first storey, devoted to the needs of ailing automobiles, is probably one of the finest motor hospitals in Canada, and certainly the finest in the west.  There is storage for 65 automobiles and efficient and experienced engineers to minister to their needs.”  The newspaper went on to state that, “the second storey of this palatial building is designed as an apartment house on a modern flat system.  The accommodation is arranged in suites and single rooms and the scheme will satisfy a long felt want.”

The building continued to function as a garage and apartment house until 1974 when it was leased to a restaurant.  At that time extensive renovations were made to the ground floor, while the second floor was closed off for use as storage.  Some suites have marbled glass windows allowing in light from the four skylights in the centre hallway.  The original wood staircase to the terrazzo front foyer remains intact, as do the men’s and women’s washrooms with terrazzo flooring.  The structure has a crenellated roof line with crest embellishments and terracotta trim.  Canopies have been erected over its entrances, and though the former apartment entrance is closed off, it still features the arched stone entrance with the year of its construction above. 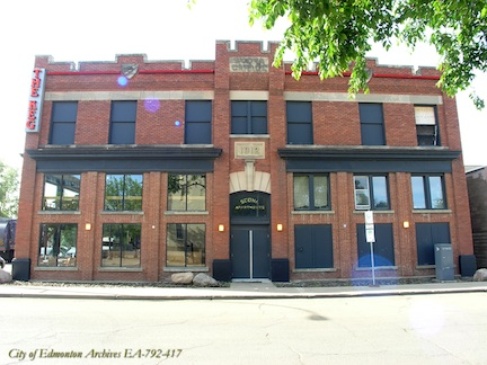 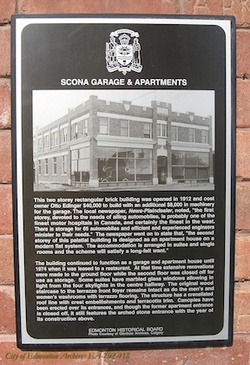