Edmonton’s civic plaza has been a gathering place since the beginning of the twentieth century. It is the seat of civic government and has served as a place of celebration and protest, as well as the location of a city market, from about 1900 to 1965. The Rice Street market was established in 1903 at the site of what is now the Stanley A. Milner Library. Farmers from the region gathered to sell produce, among them Italians. Antonio Luigi Tonsi had a small farm and several greenhouses near Fort Saskatchewan. In April 1929, he wrote the Mayor asking for a better stall. Miner and One Big Union supporter Joe Centazzo marched in the May Day Demonstration Parade in 1937 to protest high unemployment and the plight of workers in the City. It was said that he wanted a Communist flag to be draped over his coffin when he died. In the late nineteenth century, May 1 had been designated as International Workers' Day by the Socialists and Communists of the Second International. Floats at the Edmonton parade protested for various causes including against Fascist brutality in the Spanish Civil War. To reflect the boom in Edmonton resulting from the coming in of the Leduc No. 1 Well, in 1947, City Council decided to build a new City Hall. The building replaced the Civic Block built in 1913. Edmonton’s second City Hall, in the Modernist Style, was opened in 1957. The building inspired criticism from the outset but this paled in comparison to that levelled at the sculpture designed for the front of the building by University of British Columbia architecture professor Lionel A. J. Thomas. The 6-metre high bronze fountain, representing nine Canada geese and titled “Migrants,” was illuminated at night and sprayed water up to 12 metres high. It became known as the “Spaghetti tree” or “Spaghetti fountain.” The market moved to 97Street and a new library and art gallery were built. With the death of Sir Winston Churchill in 1965, the square was renamed in his honour. In 1992, a third City Hall, designed by Gene Dub, was completed. 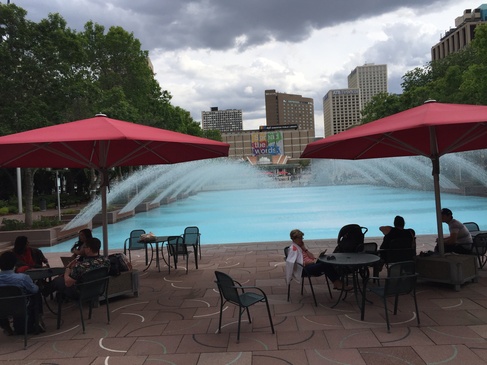 Churchill Square from the front of the new City Hall overlooking the wading pool and fountains and, in the distance, the Stanley A. Milner Library, June 2016. Photo by Adriana A. Davies. 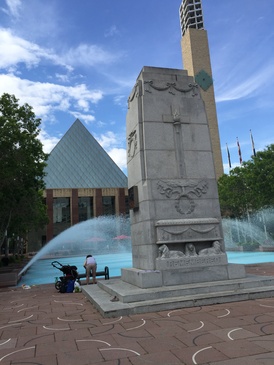 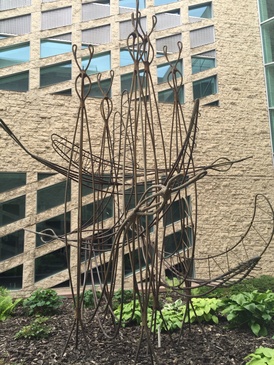