Cars and pickup trucks are common sights on the streets of Edmonton. But for a single day in the summer in “Little India”, hordes of chanting devotees pull a chariot down its streets, smashing coconuts while singing the praises of the Hindu Gods Rama & Krishna: welcome to the Ratha-Yatra festival.

The Ratha-Yatra commemorates mythological events from 5,000 years ago, when Krishna, otherwise known as Lord Jaggannath, and his brother Balarama and sister Subadhra went from their home in Dwarka to attend a festival in Kurukshetra. Gopis (cow-herders) met them and escorted them in a festive parade from Kurukshreta to Vrindavan following the Mahabharata war. They pulled him in a Ratha, or chariot, to express their love & devotion for Lord Krishna. Today, the Ratha-Yatra participants do the same “We are expressing our thanks to the supreme creator. It also promotes universal love for all things, including plants and animals. We are expressing our love for all the beings created by Krishna” according to HG Bala Krishna Dasa, the President of the Sri Sri Radha Govindaji Temple.

In Edmonton, the Ratha-Yatra happens under the auspices of the Festival of India, which is presented by ISKCON, or the International Society for Krishna Consciouness.  ISKCON in turn comes from the teachings of Swami A. C. Bhaktivedanta Prabhupada (1896-1977), whose practices around vegetarianism, music and devotion to Krishna, are otherwise known as the “Hare Krishna” movement.

Through his writings and teachings, collected in such books as “Bhagavad-Gita As It Is”, Swami Prabhupada inspired millions to worship Krishna and to observe such principles as truth, education, food for all and transcendental meditation. These teachings resonated worldwide in the 1960’s and ‘70’s and influenced George Harrison and John Lennon of The Beatles quite deeply. Outside of India, more than 100 cities around the world host their own Ratha-Yatra festival today.

After the chariot has been driven around the area, the Sri Sri Radha Govindaji Temple welcomes everyone to the Festival of India on the grounds of the temple, which was constructed in 1994. Devotees practice yoga, eat vegetarian food and partake in vibrant cultural festivities such as music and dance. This temple has been the home of the Ratha-Yatra festival since 2003, and draws as many as 2,000 people at a time. The Temple also maintains an active social media presence on its activities and ISKCON in general. 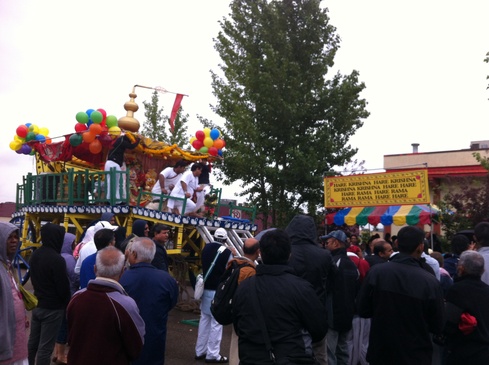 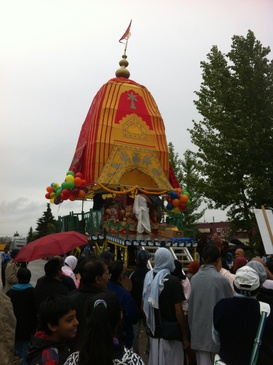 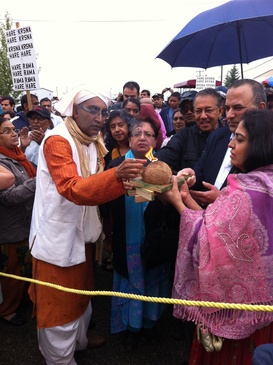 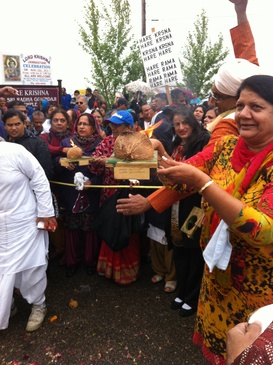 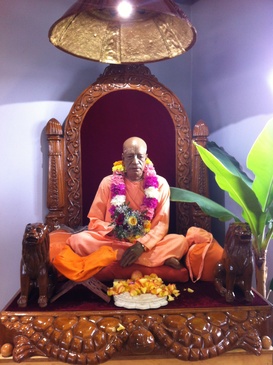