The original St. Anthony’s Roman Catholic Church (now at Fort Edmonton) was built in 1894, the first Roman Catholic church in south Edmonton and an initiative of Father Lacombe. It served originally as a mission of St. Joachim’s on the north side but even by 1897, the church was overcrowded during services. The building also served as the first school of the St. Anthony’s Roman Catholic School Division #12, with two nuns as teachers who travelled from the north side every day by ferry in summer and over the ice in winter. A new church was built in 1905 but the old building continued to serve as a sacristy, connected by a passageway to the newer building until 1949 when it was transferred to the Ukrainian Catholic rite.

The current St. Anthony’s Roman Catholic Church (Whyte Avenue) was built in 1949 after a great deal of fund-raising and increases in building estimates. The architects were the firm of Blakey and Blakey and their design of the semi-circular interior was “to bring the people close to the Mass”. The mortgage seemed a huge undertaking but the discovery of oil at Leduc brought large numbers of new people to the parish and the mortgage was paid off in just six years. The building originally was constructed with plain glass windows and the stained glass was installed around 1955.

Photos of the original church at Fort Edmonton Park 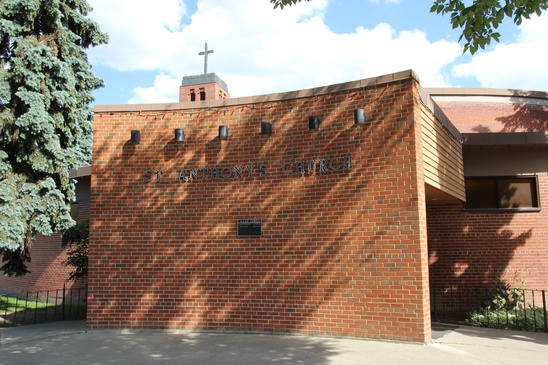