St. George Ukrainian Catholic parish was created in 1955 for traditionalist, Ukrainian-speaking faithful, especially new immigrants arriving in Edmonton after the Second World War. The present gold-domed brick church dates from the 1980s. Done in the Kyivan-Byzantine style of the 11th to the 13th centuries, the iconography covering the interior walls is spectacular.

By the mid-20th century, six decades in the Canadian environment had had an impact on Ukrainian Catholic practices such as the introduction of Latin features, questions about the use of English and the replacement of the Julian with the Gregorian calendar (so that, for example, Ukrainians would celebrate Christmas with other Canadians, not thirteen days later). Unprepared for such changes, traditionalist displaced persons arriving after the Second World War often created new parishes, among them St. George the Great Martyr in Edmonton, that better served their spiritual needs. Established in 1955, St. George parish acquired and converted a Polish Roman Catholic church that it had outgrown when arson destroyed the building in 1980. Its gold-domed red brick replacement, designed by Andrew Baziuk and modelled after an 800-year-old-church in Ukraine, was erected as a monument to the millennium of Christianity in Ukraine celebrated in 1988. However, the church’s location on the approach to the Edmonton city airport did impose certain modifications, notably a reduction in height. The most remarkable feature of the present church is the monumental iconography of the interior. Every surface was painted over a period of seven years by Canadian iconographer Heiko Schlieper in the Kyivan-Byzantine style of the 11th to the 13th centuries. Their rich colours are enhanced by the liberal use of gold leaf. The icons depict both traditional Christian subjects, such as the four Evangelists below the central dome, and Ukrainian saints and religious events, including the baptism of Ukraine-Rus’. The strong Ukrainian consciousness that exists in and nurtures St. George parish is reinforced in the decorative imagery with repeated use of the trident, political symbol of Ukrainian nationalists and the coats of arms of cities in Ukraine. Today St. George’s parish attracts worshippers from all Ukrainian communities and generations, and has recently welcomed newcomers to the city from Ukraine, Poland, Bosnia and elsewhere abroad. 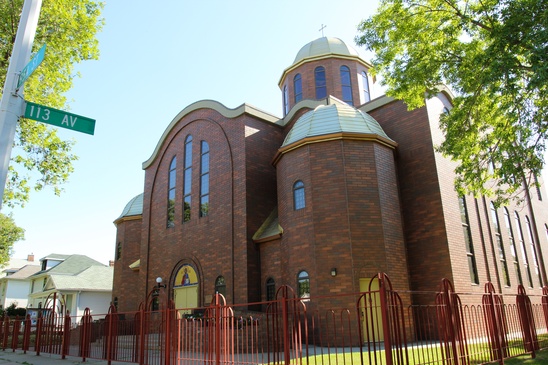