Built in 1888 on this site, Edmonton’s first separate school to come into being under Northwest Territories legislation was operated by the Sisters Faithful Companions of Jesus.  Its first board included George Roy, chairman, L. Kelly, treasurer and A. Prince, secretary.

In the 1850s, members of the Missionary Oblates of Mary Immaculate established St. Joachim's mission at Fort Edmonton and began serving the post's Catholic community in a modest house-chapel. Over the succeeding decades, the parish congregation relocated twice: in 1877 to a church constructed near present-day Stony Plain Road and 122 Street and in 1886 to a new place of worship erected just north of the current St. Joachim's. The church built in 1886 was situated within a block of land purchased by Bishop Vital-Justin Grandin three years earlier as the foundation for a Catholic religious district that came to include two hospitals as well as a rectory, convent, seminary, school, and church.

By the late 1890s, the growth of St. Joachim's congregation necessitated the construction of a new church. The basic structure of the new church was completed in 1899, though several elements - including the steeple and the stained glass windows - were added shortly after. The new St. Joachim's church was the heart of the Catholic neighbourhood in Oliver and the institutional base for the francophone Catholic community in Edmonton. Prior to the completion of St. Joseph's Cathedral in 1925, St. Joachim's also served the growing anglophone Catholic community in central Edmonton, offering liturgies in both languages and maintaining both English and French-speaking clergy. As a direct descendent of the earliest parish community in Edmonton and as the oldest extant Roman Catholic Church in the city, St. Joachim's strongly represents the rich history of Roman Catholicism in Edmonton.

The building has since been demolished and replaced by Manoir St Joachim-St Thomas Manor apartments. 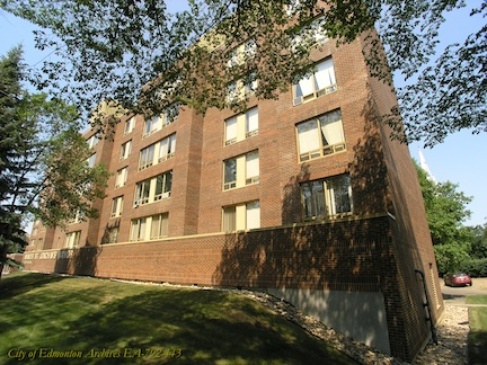 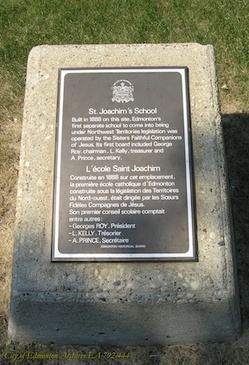