In an atmosphere of rising national consciousness sparked in 1918 by events in Ukraine, and animated by dissatisfaction with developments in the immigrant Ukrainian Catholic church, many of the leading figures in the pioneer Ukrainian community came together to form the Ukrainian Orthodox Church of Canada. The new institution was to be an independent Ukrainian national church with control vested in the laity. In Edmonton its supporters organized St. John the Baptist parish in 1923, celebrating the Divine Liturgy in the Hrushevsky Institute until they purchased the Grace Methodist church on 96 Street in 1926 and made the necessary interior alterations to accommodate the Eastern rite. As this space grew too small, the ground for the present building was broken and blessed in 1950 by the visiting Bishop Mstyslav Skrypnyk. The cathedral itself was officially opened and its cornerstone blessed in 1952 by Metropolitan Ilarion Ohienko of Winnipeg. Edmonton had become the headquarters of the Western Eparchy the previous year. The church’s facade features bright mosaics of the four evangelists (Matthew, Mark, Luke, and John) and the Protecting Veil of the Mother of God (she shelters St. Sophia cathedral in the Ukrainian capital of Kyiv on her right, St. John cathedral in Edmonton on her left). On the main doors are bronze reliefs of St. Andrew and St. John the Baptist as well as Sts. Volodymyr and Olga who Christianised the lands of Kyivan Rus’ that became modern Ukraine. The interior is light and airy, the walls plain and large stained glass windows (with Ukrainian touches) create a riot of colours on the floor in the sunshine. The icons in the iconostasis are the work of artist and parishioner Vadym Dobrolige who immigrated to Canada as a displaced person after the Second World War; he also painted Ukrainian rural churches in the surrounding area. 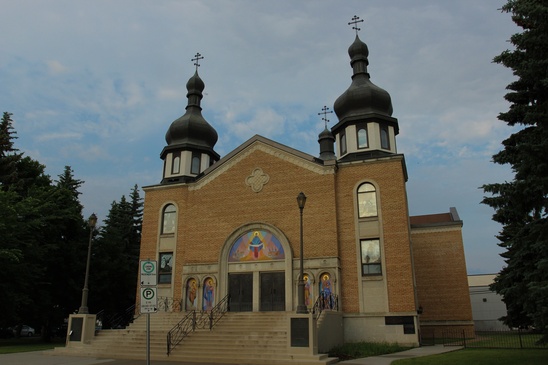 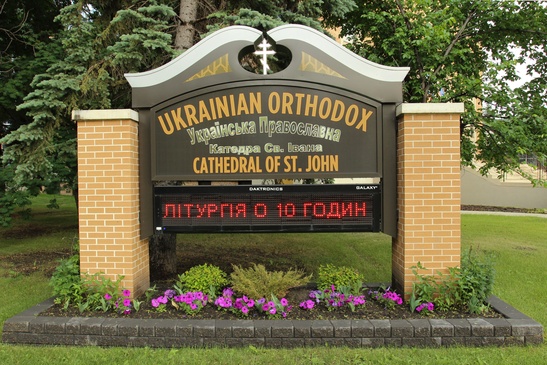