Designed by: Richards, Berretti and Jellinek

According to the Modernist thinking which took shape after World War II, the modern building was to employ clarity of structure and make ample use of newly emerging fabrication technologies, and modern neighbourhoods were to be divided into parts that would encompass living, working, leisure and circulation. In this sense, St. Timothy's Anglican Church in the west Edmonton community of Laurier Heights, is a shining example of Modernist principles at play.

Situated amid well-kept bungalows and close to an adjacent park and community league, this church became not only a place of worship for neighbourhood residents, but also a canvas on which to project some very progressive ideals regarding both religion and design for its time. St. Timothy's was actively engaged in the social culture of its community and the bigger city - delivering sermons that incorporated live performance and artistic visuals. It could even be said that modern design was used as an advertising device for the church - a physical reflection of the church's acceptance of change. An example of this can be seen in the impressive and visually stunning stained glass window flanking the altar, custom-designed and installed by Austrian artist, Ms. Ernestine Tahedl. This handcrafted element served to blend warmth and a touch of the personal with the stark implementation of mass-produced building technologies.

The building itself has a bold asymmetrical layout. A simple rectilinear massing highlights the double storey sanctuary supported by a single storey service space, forming an enclosed courtyard at the northern extent of the building. A glulam beam roof structure over the sanctuary is carried to the exterior to orient users to the building’s interior circulation. Formal entries are highlighted by black curtain wall glazing with inset black steel doors to emphasize entry to the church, while the modest white masonry brick facade capped by flat, black roofing contrasts the bungalow-developed neighbourhood and emphasizes the handcrafted coloured glass of the altar windows. The dramatic structural expression of this church sets it apart as a significant contributor to the city's Modernist architecture.

An example of this can be seen in the impressive and visually stunning stained glass window flanking the altar, custom-designed and installed by visiting Austrian artist, Ms. Ernestine Tahedl. This handcrafted element served to blend warmth and a touch of the personal with the stark implementation of mass-produced building technologies. Please make correction: I was not an visiting artist, but emigrated in 1963 from Austria and have lived and worked in Canada ever since.My mosaic murals from the Post office have just been reinstalled in front of the new Royal Alberta Museum. www.interlog.com/~etahedl 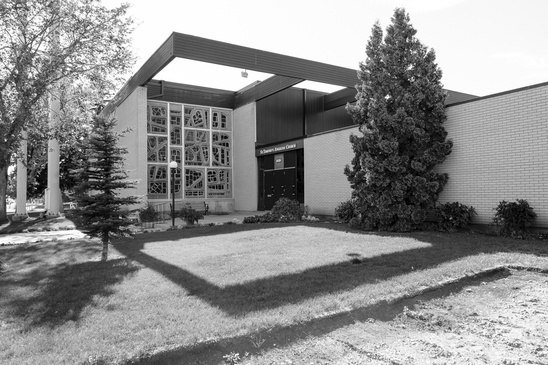 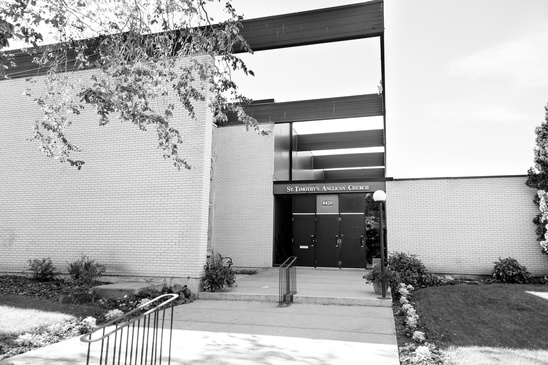 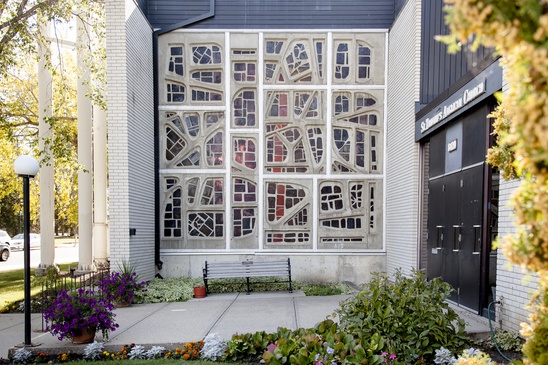 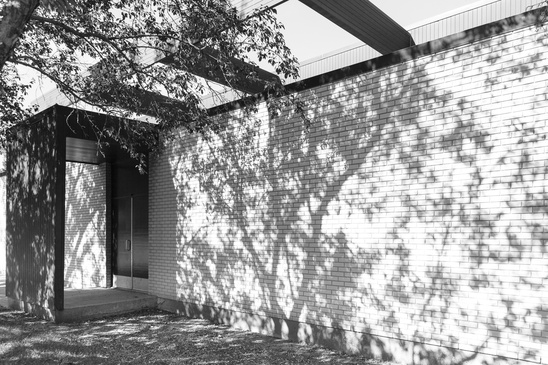