The Massey Medal-winning Stanley Engineering Building was originally designed for the Stanley Engineering firm (now Stantec) and is one of the finest examples of International Style Modernism in Edmonton. The Stanley Building is a direct descendant of the 1963 John Deer Headquarters in Moline, Illinois designed by renowned American architect, Eero Saarinen. Like the John Deere building, the Stanley Building is composed of an exposed steel structural frame expressed on the exterior of a curtain walled glass box, which encloses the building. The architects chose to use ‘cor-ten’ steel which is a corrosion-resistant steel, which forms a protective coating of iron oxide (rust) when exposed to the atmosphere. This rust layer actually provides protection as the fine crystals of early rust re-crystalize to form a dense barrier that retards further corrosion. In his book Modern Achitecture in Alberta, Trevor Boddy suggests that the detailing on the Stanley Building has ‘an almost Japanese quality of quiet refinement’. 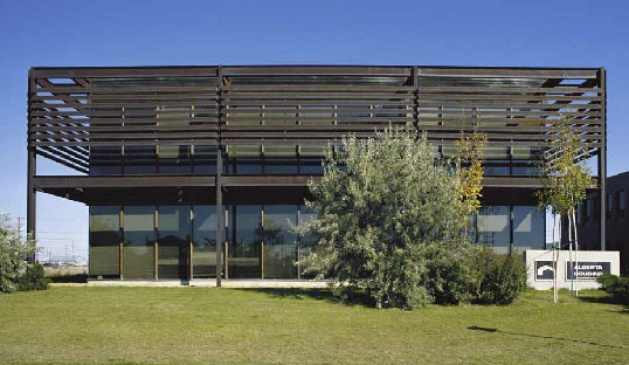