The heritage value of the Strathcona Public Building (South Edmonton Post Office) lies in its architectural significance as an example of federal public buildings in western Canadian communities. In addition, the building is significant for its contribution to the prestige of Edmonton as an emerging urban centre.

Constructed between 1911 and 1913, the South Edmonton Post Office is notable for exemplifying the shift toward the Edwardian Classical Free style design and exterior decoration in federal public buildings. Built according to the plans laid out by David Ewart, the Chief Architect of the Canadian Department of Public Works, the building marked a departure from the typical Romanesque Revival style, often used in post offices. Following these newer aesthetic principles, the original tower was "found to be short in height," and was replaced by one ten feet taller in 1914-15. The building's rational, symmetrical composition, evident in such features as the five-bay division of each facade, is a hallmark of the classicism of the Edwardian era. Several embellishments characteristic of this style, such as the ornamented limestone entablature, pilasters, contrasting brickwork, and shaped voussoirs identify the Strathcona Public Building (South Edmonton Post Office) as a very good example of small-scale public architecture in western Canada.

Serving also as the Strathcona Public Building, the South Edmonton Post Office was constructed during the golden age of pre-Word War One prosperity, and exemplified Edmonton's rapidly increasing importance. The imposing structure was one of the most significant public structures built in the city in the years immediately following Strathcona's merger with the City of Edmonton in 1912. Lending added dignity to the Whyte Avenue commercial area with its impressive design features, the building quickly became an indispensable part of the daily lives of the burgeoning population residing and doing business on Edmonton's south side. As such, the Strathcona Public Building (South Edmonton Post Office) has become a well-known landmark of Old Strathcona. 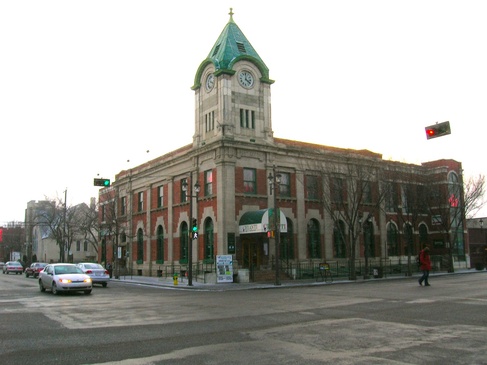