When the cities of Edmonton and Strathcona were amalgamated in 1912, both were in the throes of a massive wave of development. Several new subdivisions were in the state of formation, while others were rapidly being filled with new dwellings. Whereas newer subdivisions like Windsor Park, Glenora and the Highlands, intended for upper class people, featured 66-foot lots, the older ones closer to the urban core of Edmonton and Strathcona were intended to facilitate greater density, and so were surveyed into 33-foot lots. As the houses built on them would be so close together, the result was certain uniformity in design. This was the case in much of eastern Strathcona, where one of the realtors, Thomas L. Scott, acquired lot 27 of Block 94 (today, 9938 - 85 Avenue). On it, he contracted W.M. Leppard to build a wood frame four-square house with hipped roof and front veranda that was almost identical to the one next to it at 9942.

When the house was completed, Scott himself moved into it. Being in the real estate business however, he was no doubt well prepared to sell his home if a profit could be made, and in 1913, it was acquired by a widow named Ellen Walker. In 1916, the dwelling was taken over by James Strang, Manager of Strang and Company. The following year, it became the home of Daniel E. MacDonald, who was the new Superintendent of Buildings with the provincial government, a position he would hold until 1935, when the new Social Credit party came to power. Along with his wife and children, MacDonald would continue to occupy his home on 85 Avenue until it was taken over by his daughter, Edie, in about 1960. Edie would be its longest serving resident. She was married to a salesman for Eaton's named Ken Melford, and, with her family, would live in the house for the next 30 years, keep it in good order, and retain most of the original elements.

In summary, the historical significance of what is called the Thomas Scott Residence (perhaps better referred to historically as the Daniel MacDonald Residence) lies in its representation of the great real estate boom experienced by Strathcona and Edmonton during the years leading up to World War One. The house may be somewhat significant too in that it was occupied by the provincial Superintendent of Buildings and his family, and, after that, by his daughter and her husband. During the combined occupancy of the two families, spanning more than sixty years, many of the building's original elements were retained intact.

The Thomas Scott Residence is a two-storey wood frame house with a pyramidal roof, a two-storey bay window on the street facade, and a front veranda with balcony above. It is finished on the main floor with wood drop siding and corner boards, and with shingles on the second floor. This is a good, typical representative of a very common house type. 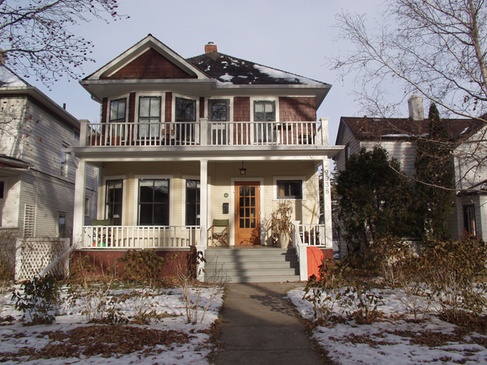