The Edmonton Journal reported  construction “of the new (Toronto Dominion Bank) headquarters reflects the tremendous growth of the TD Bank in Alberta. The Bank is now operating its 550th branch office with 16 new offices opened in the past five years.” Edmonton Mayor Elmer Roper called the new building a “symbol of redevelopment.” Mayor Roper was acknowledging what he saw as the renewed growth of Edmonton as he dedicated the new structure built on the site of the former Gariepy Block.

This striking 7-storey office building features one of Edmonton’s earliest commercial off-the-shelf curtain wall claddings, which faces 100 Street and uses two different colours of anodizing—clear and gold. On the Jasper Avenue facade a full height intricate gold anodized aluminum sunscreen is symmetrically flanked by white marble cladding. The entrance lobby is finished in the same marble material and Alberta historical murals hung throughout. Modern touches at the time—two elevators and air conditionings—were incorporated. At the time of its completion in 1960, the TD Bank building was considered the most modern and up-to-date office building in the city. 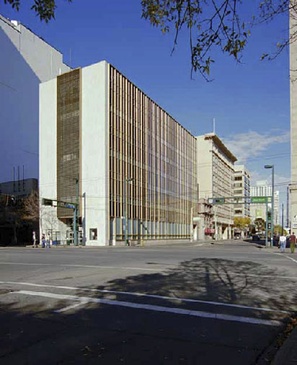