Established in 1972 as the vision of postwar immigrants Hryhory and Stefania Yopyk, the Ukrainian Canadian Archives and Museum of Alberta will soon relocate to an award-winning, refurbished historical building on Jasper Avenue. Its collection—especially rich in pioneer artifacts, folk arts and military memorabilia—is increasingly focusing on the experience of Ukrainians in Edmonton.

The Ukrainian Canadian Archives and Museum of Alberta (UCAMA) owes its existence to postwar immigrants and Edmonton restaurateurs Hryhory and Stefania Yopyk, who merged their love for their Ukrainian homeland with an appreciation of the Ukrainian heritage in their adopted country. What began as a private collection of artifacts, books, photographs and archival records assembled from Edmonton and the surrounding area, became the community-based UCAMA in 1972. Its exhibits include costumed historical figures from Ukraine’s past, examples of traditional folk dress, embroidered textiles, immigrant trunks, pioneer artifacts (spinning wheels, looms, carpenter tools) and sacral objects (icons, banners, candlesticks). The museum also has an extensive collection of Ukrainian Canadian military memorabilia, some of which is on display, and of Ukrainian and Ukrainian Canadian art, including contemporary pieces. Of particular interest to researchers is the library of some 40,000 volumes, much of which focuses on Ukraine, and the archives that document the experience of Ukrainians in Canada, especially in Alberta and Edmonton, but also nationally. The papers of Michael Luchkovich, the first Ukrainian member of Parliament, touch upon all three areas. The UCAMA photograph collection—over 3,000 of its images can be searched digitally—covers many aspects of the local Ukrainian community going back to the early 20th century: physical structures (especially churches), cultural activities, businesses, organizational executives and members, special events, family gatherings and prominent individuals. In 2014 UCAMA expects to relocate to the historical Lodge Hotel and Brighton (Ernest Brown) Block on Jasper Avenue. Taking advantage of its new quarters on the edge of the downtown area where Ukrainians originally lived, worshipped, conducted business and operated community centres, the museum will be ideally placed to depict and interpret the Ukrainian Edmonton experience. At present UCAMA is open Tuesday to Friday from 10:00 a.m. to 5:00 p.m. and Saturday from noon to 5:00 p.m. 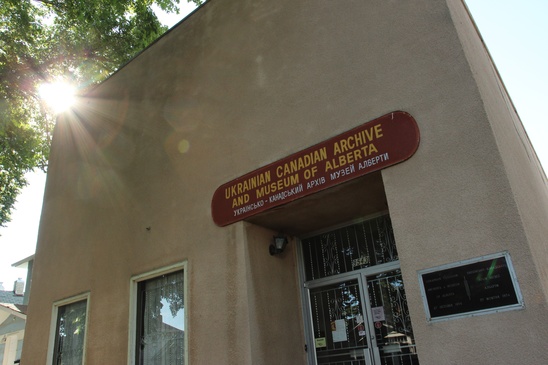