Shortly after the Ukrainian Catholic Women’s League of Canada organized a branch in Edmonton in 1952, it founded what is one of the city’s longest operating museums. Specializing in Ukrainian cultural artifacts, especially from the pioneer immigration and surrounding area, it is located in the basement of St. Josaphat Ukrainian Catholic Cathedral.

The Ukrainian Catholic Women’s League of Canada (UCWLC) was established as a national body in 1944. Its motto—Catholic faith, Ukrainian culture, Canadian citizenship, charitable activity—identifies its priorities. In Edmonton, Ukrainian Catholic laywomen began organizing early in the century, notably around St. Josaphat parish where the first local UCWLC branch formed in 1948. Four years later it spearheaded the Ukrainian Catholic Women’s League of Canada Museum that today represents and serves the entire Edmonton Eparchy. The museum’s collection and rotating exhibits focus on Ukrainian ethnographic artifacts, both those brought to Canada in the trunks of successive waves of immigrants (but especially the first pioneer generation) and those created by immigrants and their descendants in this country. Its holdings are particularly rich in handicrafts and other items identified with the home and women’s work, for example, textiles, Easter eggs, woven rugs, ritual breads and, above all, embroidery. Some artifacts—like the wedding headdress an immigrant to Edmonton wore in her village in Ukraine in 1949—tell wonderful family stories. Special exhibits also celebrate seasonal events in the religious calendar or major anniversaries in the history of Ukrainians in Canada and the Ukrainian Catholic church. In keeping with the UCWLC’s long-time emphasis on not only preserving heritage objects but also encouraging the retention of traditional Ukrainian handicraft skills in Canada among both members and non-members, the museum also sponsors workshops and courses, including Easter egg writing and embroidery. Located in St. Josaphat auditorium (accessed via the south, rear side door), the museum is open the first and third Sunday of the month, 9:00 a.m. to 1:00 p.m.; the second and fourth Wednesday of the month, 1:00 p.m. to 4:00 p.m.; and by appointment. 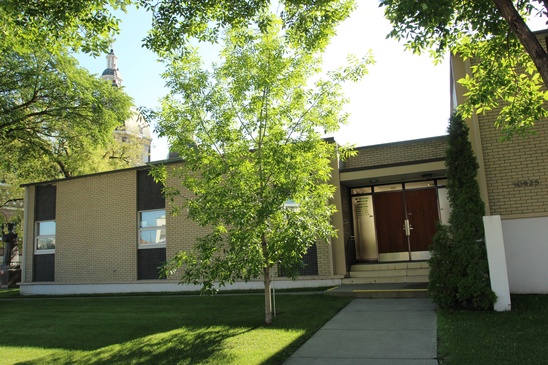