The Ukrainian National Hall was erected in 1917 as a Ukrainian Catholic community centre. Over the years it has hosted everything from plays, concerts, lectures and art exhibits to political meetings, organizational banquets and visiting overseas dignitaries. Now under other ownership, the hall is the oldest, standing identifiable Ukrainian building in Edmonton.

The Ukrainian National Hall (Home) dates its origin from 1906 with the establishment of the Prosvita reading society under Ukrainian Catholic auspices, then centred at St. Josaphat parish. The biggest event in the life of the young organization was the 1910 visit of the European head of the church, Metropolitan Andrei Sheptytsky, during his tour of Canada. The building on 108 Avenue and 96 Street opened in 1917. Like similar Ukrainian institutions across the prairies, the Ukrainian National Hall engaged in cultural, educational, political and church-related activities both focused in Edmonton and reaching out to Ukrainians across Alberta. Early undertakings included the mixed youth choir and dramatic circle, Boian, the pioneering women’s group, Zoria, and the Ukrainian school for children taught by the Sisters Servants of Mary Immaculate. The premises also housed the offices of Ukrainian News Publishers (which today produces a weekly newspaper of the same name). Other activities—lectures, concerts, banquets—were held to support or publicize events in Ukraine, cultivate Ukrainian consciousness, and mark important Ukrainian anniversaries, often related to independence struggles. After the Second World War, the hall became a focal point for initiatives such as the establishment of the Ukrainian scouting association, Plast, by the predominantly Ukrainian Catholic displaced persons settling in the city. By the late 20th century, the Ukrainian National Hall as a focus for Ukrainian Catholic organizations and a place for Ukrainian Catholic or other community gatherings had been supplanted by more modern and more conveniently located venues. Nonetheless the building still stands, the oldest structure in Edmonton with known Ukrainian roots. Just as Ukrainian community organizations in the past often initially acquired buildings belonging to other groups and adapted them to their needs, the hall now belongs to the Cornerstone New Testament Church of God.

I believe this is the wrong address and picture. The picture is of the St. John's Cathedral's modern parish hall, which is not the building described in the text. I believe the building the text describes is 9620 109 Avenue Northwest, Edmonton, AB, based on https://www.edmonton.ca/documents/PDF/5.6_A_BOYLE_RENAISSANCE_Historical_Review_final_FEB10.pdf see page 22. This is building appears to have a plaque on it from Google Street View images, so it should be possible to verify with the Historical Board.

I support the above comment. The building at the 109 Ave. address is described here (above link is invalid) https://www.edmonton.ca/sites/default/files/public-files/documents/PDF/5.6_A_BOYLE_RENAISSANCE_Historical_Review_final_FEB10.pdf and there's a photo at https://photos.zolo.ca/9624-109-avenue-north-west-edmonton-E4226328-1-p.jpg 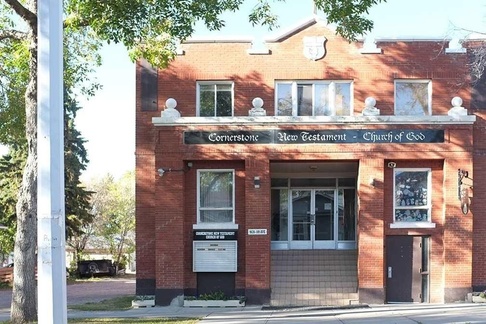 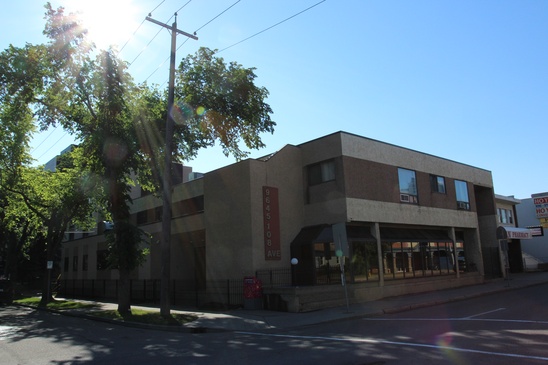