Designed by: Richards Berretti and Jelinek Architects and Engineers

Original Owner: U of A Students Union

In 1962 the University of Alberta‘s student body voted in a referendum to provide funding for a new student union building, agreeing to pay a fee of $11/term per student for the new facility. This funding, along with the support of the Province of Alberta and the University, enabled the project to break ground in 1965 and open in 1967. The Students Union Building (SUB) was the largest such building in Canada at the time of its completion. It contained cultural and recreational facilities for student use in addtion to the student council chambers, a bookstore, extensive food services and 750 seat performance theatre. The building combines the International Style influences of Mies van der Rohe (tower) with Corbusian traits on the lower two floors (pre-cast clad concrete podium). Originally the main floor was composed of a series of concrete columns extending from the exterior to the interior through the fully-glazed recessed exterior wall. The outermost columns act as a colonnade and support the pre-cast concrete panel cladding of the second floor volume. 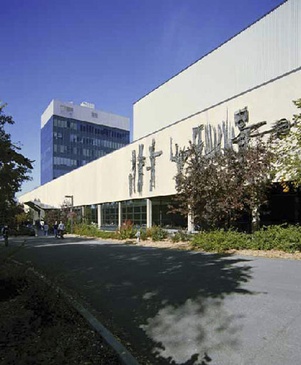 U of A Students' Union Building, Edmonton, James Dow