The Vietnamese Mary Queen of the Martyrs Roman Catholic Church, formerly Immaculate Conception Roman Catholic Church, was built in 1903. The French Gothic revival style can be seen in the prevalence of buttresses at the corners and the sides of the building. The high spire and the statue above the door draw the eye upward. Other classical features of the French Gothic style are also evident – the rose window in the tower, the arched Gothic windows, the small pinnacles around the tower and the steep-pitched roof. The church is actually a brick structure but was covered in stucco in one of the many remodellings. A connection to Hollywood – singer and actor Robert Goulet was baptized here in the 1950s. 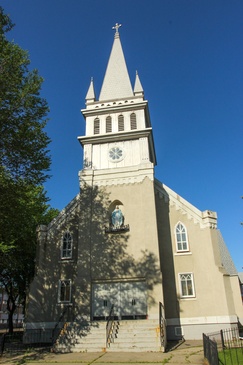