Walterdale Flats, located across the river from the Rossdale Flats were named for John Walter, an Orkneyman who worked as a boat builder for the HBC between 1870 and 1875 and then began his own business on the south bank of the river. Walter’s enterprises included lumber milling blacksmithing, coal mining, a general store, and telegraph office as well as boat building. A natural ford in the river (just upstream from the 105 Street bridge) was the foundation for Walter’s ferry service. If you look in the bushes near the river edge on the west side of the bridge, you can see the remains of an old ferry. Until recently, the remains of a York boat constructed by Walter also lay near the river bank.

When the river is low the skeleton remains of an old sternwheeler; it pokes out of the water on the south side of the river. John Walter constructed and used this sternwheeler, complete with dance floor and a banc, at the turn of the century for Saturday evening excursions on the river; the 50 cent sternwheeler tour was very popular. Modern entrepreneurs are now attempting to revive this romantic era and have recently constructed a replica sternwheeler (complete with casino) for use n the North Saskatchewan River. John Walter was Edmonton’s first millionaire and his business success was legendary. He was instrumental in the amalgamation of Edmonton and Strathcona before he died of complications following an appendicitis operation in 1920.

Several of John Walter’s residences have been preserved although most of hit empire was destroyed in the great flood of 1915, when sever metres of water washed over the flats. These former residences were moved to their present location, immediately west of the Walterdale Bridge, and are now used as interpretive centres by the City of Edmonton Parks and Recreation Department.

Prehistoric site deposits were discovered during the construction of the nearby Kinsmen Sports Centre. Test excavations in the area of the parking lot revealed a few scattered stone tools in alluvial deposits. The age and affiliation of these remains could not be determined, although they were clearly prehistoric given the depth of burial. 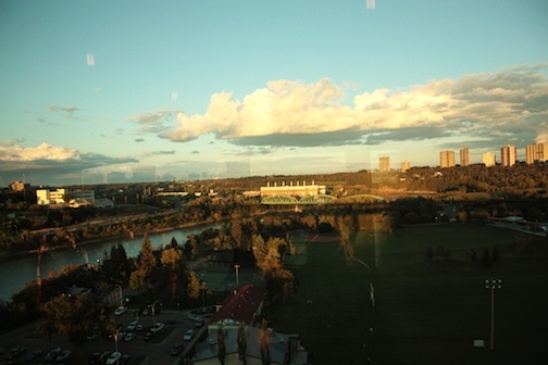 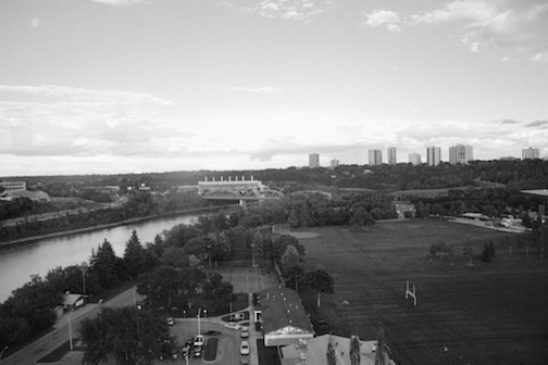 View of Walterdale Flats from the Alberta Legislature grounds, 2012.