The Westminster Apartments building was erected during the pre-First World War population and building boom.  Constructed in 1912 by Western Canada Properties Ltd. at a cost of $65,000, the building was considered very elegant and counted the Honorable G.H.V. Bulyea among its tenants.  Bulyea was chairman of the board of Public Works for the provincial government and later became Lieutenant Governor of Alberta.

The building has an historical association with C.A. Brine, building and property manager (1912-1948) for Westminster Apartments Ltd.  His fortune allowed his wife, Margaret Hazelwood Gold Brine, to be a generous benefactor of the arts in Edmonton after his death in 1963.  The Westminster Apartments also had a long association with the Spillios family beginning in 1948 when George Spillios, a leader in Edmonton’s Greek community and proprietor of the city’s well known American Dairy Lunch, purchased the building.

The architectural significance of the Edwardian-style building lies in its distinctive detailing of its brown/red wire-cut brick cladding, the decorative use of brick patterns, corbelling that encircles the building, and glazed porcelain pendants and diamond and square tiles on its two street elevations.  Original features of the main entrance include decorative rosettes, a Tudor arch transom light, double oak doors and a stone capped brick parapet.  The building is a representative example of an elegant pre-World War I apartment building which has maintained the full integrity of its historic design and fabric. 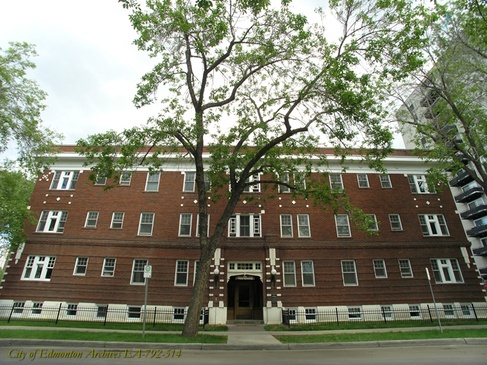 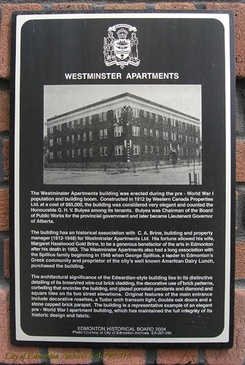