The Edmonton Transit Service Westwood Garage articulates the Structural Expressionism of the Modern movement in the articulation of the relationship of the building to its setting. The Westwood Garage is located adjacent to the Municipal Airport, the NAIT campus and an Edmonton Power building, all of which were constructed in the 1960s. This setting, as well as the functional nature of the building provides rationalization for the industrial aesthetic. The building consists of a series of steel tube columns that support horizontal concrete trusses spanned by thin pre-cast concrete vaults. This use of concrete trusses was very unusual as concrete is strong in resisting compressive force, yet weak at resisting the tensile forces that prevail in a truss. It is a good example of how architects and engineers were experimenting with materials at the time, and how the expression of those materials determined the final form of the building. 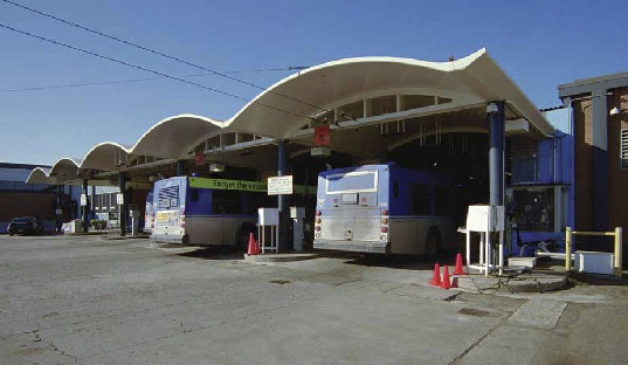