The heritage value of the W. H. Sheppard House lies in its association with prominent Strathcona businessman and politician, William Sheppard and in its elegant Georgian Revival architecture.

Born in Ontario in 1863, William Henry Sheppard travelled through the United States and Canada in his youth as an itinerant worker and building contractor. In 1894, Sheppard arrived in Strathcona and set down roots. In the decade after his arrival, he became a prominent entrepreneur in his new community, managing several hotels and becoming heavily invested financially and professionally in the area's brewing industry. His business successes helped to establish his social prestige and paved the way for his entry into local politics. Sheppard served several terms as a town councillor for Strathcona and in 1906 was elected mayor. In 1907, he constructed the impressive Sheppard Block on Whyte Avenue - a reflection of his commercial achievements and prominence among Strathcona's elite class.

In 1912, Sheppard constructed a stately new home in Strathcona. The residence evinces the clear influence of the highly popular Georgian Revival architectural style that reached its peak in Canada in the early 20th century. The style is embodied in such features as building's symmetrical massing, columned porch, and gable roof dormers. The W. H. Sheppard House's solid symmetry, harmonious proportions, and austere classical detailing impart the residence with the aura of stately elegance - an aesthetic ambience well-suited to projecting the social prestige and financial success of its owner. Situated within the historic Edmonton district of Strathcona, the home expresses the early 20th century aesthetic ideals of the area's elite residents. 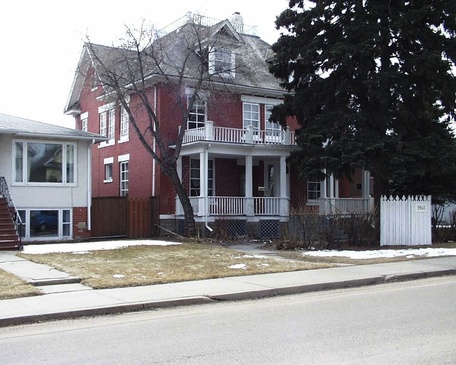