William Blakey was one of Edmonton’s most influential architects.  He arrived in Edmonton in 1907 following his brother and fellow architect, Richard, to the rapidly growing city.   While Richard rose to become Provincial Architect from 1912 to 1924, William worked mostly in private practice.  A number of his early buildings survive including Christ Church Anglican Church, Highlands United Church, the Masonic Temple and the Garneau Theatre.  These buildings, and a number that have since been demolished including the old Edmonton Journal building and the T. Eaton store, reveal an architect with the ability to produce memorable buildings in multiple architectural styles over a long professional career that lasted until 1960.  This makes Blakey one of the longest serving members of the Alberta Association of Architects.

By the 1940’s Blakey’s ideas on architecture were evolving, and he became a firm supporter of modernism in building design and construction.   He designed several strongly modernist churches such as St. Anthony’s and St. Agnes for the Edmonton Roman Catholic Archdiocese and schools for the Edmonton Separate School Board. He also designed this house for his family in 1946 to reflect his advocacy of slab grade construction and other innovations in construction methods and materials.  It features a symmetrical plan with a flat roof, large overhanging eaves, corner windows and unornamented wall surfaces.  These are all characteristic of the International style, and this residence is one of Edmonton’s finest examples of this important architectural movement. 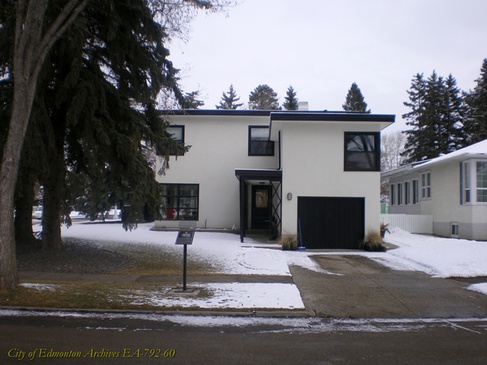 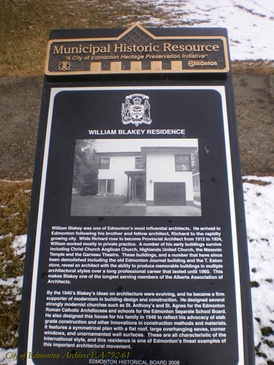