A two-storey wood frame building gave space for another residential occupancy for the top level and two commercial spaces on the ground level. Similar in construction as adjacent buildings along Namayo Avenue, the street façade consist of painted wood cladding with a top decorative cornice. Windows on the second floor overlook the avenue along with a bank of windows on the north and south side of the building.

A rooming house called C.I.A. Boarding House was located in this building in 1908. In 1909 Frisco Restaurant, denoted in the Henderson’s Directory as Chinese, was operating in this premise. The following year Henry Hilton & Company Furniture Brokers assumed the premise and was there until 1914. The Mah Park Barber Shop opened in 1920, before moving elsewhere the following year.

The 10166 address housed notable Chinese merchants including Mah Dick Restaurant (1919-20), Wing Hong Yick & Co. (1921) and Wo Sang Grocer (1923). In the Henderson’s Directory of 1922, it listed a Mah Dick, the only one in the directory, as a cook at the Royal Alexandra Hospital and whose residence was the same as the hospital. It is plausible this is the same Mah Dick who ran a restaurant in this building until 1920.

American Taxi was the tenant of 10166 from 1928 to 1929 and Acme Taxi occupied it in 1930 when the American Taxi business moved next door to 10164. The taxi companies operated as neighbours before they merged as the Acme & American Cabs and moved in 1953 to a building that was previously the Mah Sue Barber shop (10140-97 Street). 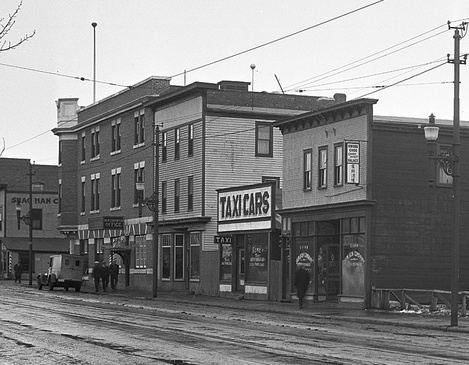