Knox Metropolitan United was originally a Methodist congregation in the then village of South Edmonton, meeting in private homes and served by the minister of McDougall Methodist.  The congregation began in 1892 at a time when the trip across the river was a precarious one and the minister often ended up staying over in the home of one of the parishioners until the weather improved. The small wooden building that was the first formal home of Metropolitan was soon outgrown and the cornerstone of a new brick building was laid in 1907. Early in 1908 the basement was ready to use for services and by the end of that year the full church was dedicated. On New Year’s Day in 1942 the building was totally destroyed by fire but the congregation began fund raising immediately and the present church was dedicated in March of 1943.

My Grandparents and Aunt (Rev. E.J. Thompson / Mrs. Helen Thompson and their daughter, Commander Joan E. Thompson) are all buried at this site. You say they are building a high-rise on graveyard?

Dr.E.J. and Helen Thompson were my aunt and uncle. Please read the history of this great man and his wife and what they did for St.Stevens college and the U of A before disturbing thier final resting places. The United Church ,U of A , St. Stephens and the developers should be ashamed.

I JUST DISCOVERED THAT MY MOTHER (IRENE MARY THOMPSON) WAS MARRIED TO MY FATHER (FRED RAYMOND ROSS JR) AT METROPOLIAN UNITED CHURCH IN AUGUST 9, 1943. REV. R. McELROY THOMPSON SOLEMINIZED THE MARRIAGE. MY MOTHER HAD TWO BROTHERS - PAUL AND GERRY.

On July 1, 2019 I and Marj will have Marked 65 years of our marriage, (July 1 1954 at 7.00 PM , in a candlelight ceremony) with the Rev Reid Vipond, the minister officiating. Marj was then a member of the large church choir as well as a CGIT leader. Mr Ray Pounder was the organist. Two cabinet members of the Social Credit were among the attending guests Hon Robert Jorgenson (also an elder of Metropolitan Church)Minister of Health and Welfare and the Honorable Gordon Taylor minister of Highwas and Transportation, 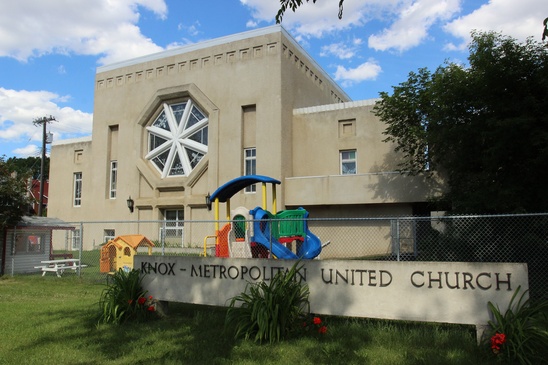