Lawrence Garneau, the Métis son of a French fur trader, made his way to the Red River area as a young man where he sided with Louis Riel and the provisional government of 1870. Like many Métis from Red River, he came to Edmonton in 1874 with his wife Eleanor, where they settled on the south side of the river on river lot 7 of the Edmonton settlement. This lot extended to what is now University Avenue. Garneau obtained title to his land in 1888 and built a small chapel on his property for Catholic church services.

After losing a lengthy and ruinous legal conflict with his neighbour, John Walter, over a strip of land in 1901, Garneau moved away from Edmonton with his family to Saint-Paul-des-Métis where he developed a large ranching operation and kept a general goods store and stopping place. He remained active in business and politics, was a staunch Liberal supporter, and ran several times for office without being elected. He was a generous man who donated funds for educational causes and helped many of the local impoverished Métis in St Paul-des-Métis. He played the fiddle at times for dances. The Edmonton Bulletin mentioned him as one of the four musicians for an Old Timers Ball in 1900; the walls were decorated with furs, and the Duck Dance and the Red River Jig were on the program.

The land where Garneau farmed now belongs to the University of Alberta. In 1953, a stone cairn was raised on the pie-shaped corner of 110 Street and 90 Avenue where it joins Saskatchewan Drive in remembrance of Laurent Garneau; the cairn and the brass plaque have been recently replaced. There is also a plaque with a photo of the couple on the west side of 111 Street at 90 Avenue in front of an old Manitoba maple that was planted by Garneau.

Some of the information here is incorrect. Garneau did not move to St Paul as a result of his spat with John Walter. In fact he gifted the land in contention to the Catholic Church and let them fight Walter (and lose). He and some of his family moved to St Paul because he supported the Oblates in their project to found a settlement for the métis people. At least two sons and their wives remained on River lot 7, which was by then known as the Garneau estates, and continued raising horses and beef and dairy cattle. Mrs Louis Garneau's account books from that period may be viewed in the U of A Library. Once the adjacent River lot 5 had been chosen as the location for the new University, Garneau started to subdivide his property. One of the first to buy several prime lots was Premier Rutherford, who built the fine house we can still see today ADJACENT to the University land. River lot 7 (Garneau's) ran from 112 street to 107 street and from the river to University Avenue. In the 1960s the university expropriated the blocks from 112 street to 110 street and from Saskatchewan Drive to 87 avenue. Apart from that small piece, the great majority of the "land that Garneau farmed" remains in private hands.

Interesting history of my great grandfather...it is unfortunate the way the family was treated and that after all his hard work that he is nothing but a footnote and barely mentioned...wonder what the city would have been like if he had not shown up there in 1874

Laurent Garneau is a descendant of Francois Garneau in L'Ange Gardien Quebec. Louis Garneau had 7 or 8 children, most died shortly after birth, except for 4 boys and one of them was Francois.

very interesting stories which i could know more about the history

I was always told how his land was stolen from him . I have seen and still know the whereabouts of all original land titles of my great great grandfathers homestead. 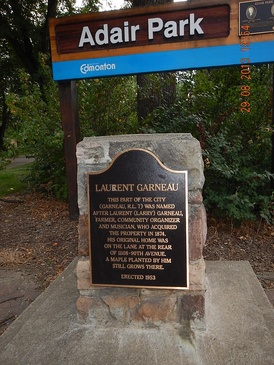