McKay Avenue School has played a significant role in the educational, social and political development of Edmonton and of Alberta.

The school was named after Dr. William M. MacKay, a Hudson’s Bay Company officer and surgeon. Dr. Mackay served at several posts, including York Factory, Norway House, Dunvegan, Lesser Slave Lake and Fort Chipewyan. After retiring from the Hudson’s Bay Company in 1898, Dr. MacKay moved to Edmonton with his family and opened a medical practice. A spelling error in the naming of the street in front of where the school now stands was perpetuated in the naming of the school.

This substantial three-storey brick school, designed by H.D. Johnston and contracted by R. J. Manson, was constructed  over 1904 and 1905 and cost Edmonton Public Schools approximately $44,000 to build. After the Province of Alberta was created in 1905, the school’s third floor assembly hall housed the first two sessions of the Alberta Legislature, held in 1906 and 1907. In 1912, due to increased need for classroom space, the school was enlarged to the west.

McKay Avenue remained an operating school until 1983. At that time, the school board made the decision to restore the building as Edmonton Public Schools Archives and Museum.

Built using the then popular Richardsonian Romanesque style of architecture, McKay Avenue School embodies the optimism of turn-of-the-century Edmonton. The exterior remains substantially unaltered, while the interior has been extensively restored to reflect its use as a school and the appearance of the third floor assembly hall during the time it housed Alberta’s first Legislative Assembly.

For information about booking McKay Avenue School as an event venue, please call the EPSB Archives at 780-422-1970. 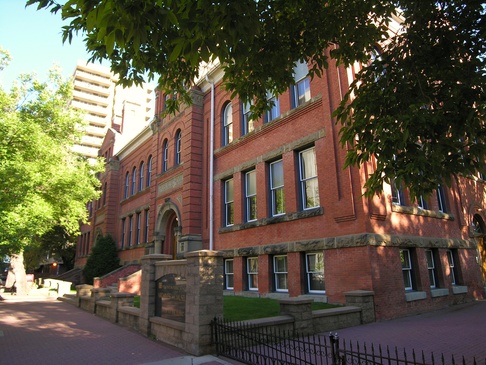 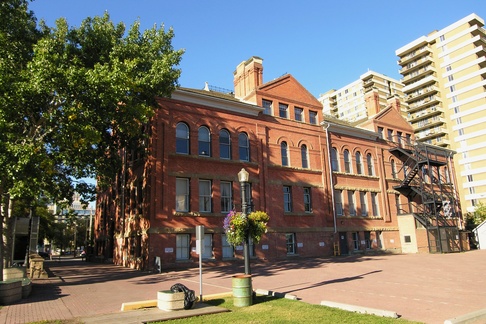 I've always loved this school, which I attended in the early fifties for grades one to five. The school and its surroundings have left me with many great memories, and then in the eighties and nineties, I was able to go back for a number of seminars and school PD days, as well as a wedding. What a historic treasure this is for the city and province.

I work for Alberta Community Services and Supports, in one of the Assistant Deputy Minister's office. In the past, we have booked your upper floor for meetings. I am wondering if that is still available. We are looking for Nov. 28 as a meeting date. Please have someone contact me at 780-638-1351 to let me know if we can book meeting rooms and if it is available on that date. Thank you!!

I was a student at McKay from 1953 to 1960 Grades 3 to 9. I lived down the 104 St. hill below at 9819 104 St. in a white 3 storey clapboard apartment building that had been a hotel at one time. As seen in archival pictures of the building of the high level bridge one can see the apt. bldg. already built.

As a student at McKay, my grade 3 teacher was Miss Hazel Mallett. She had white haired swept up in a bun and had the look of Mrs. Santa Claus. She told us that she had been a student in the white wooden school that presently sits on the McKay School site. She read us the book, "Little House on the Prairie."

When I was in grade 9 at McKay, my best friend, Lorraine, and I carved our initials (LP and KW) into the brick. They are visible to the left, I believe, of the "Girls Door" steps. The girls went into that door facing east and the "Boys Door" where the boys entered was on the opposite side of the school facing west.

My school documents are in the teachers' students'registration books in the McKay Avenue School Archives with my name Kathleen Weselake with my school marks. I went to Victoria Composite High School, took the Matriculation curriculum, gradu- ated grade 12, worked as a clerk typist and a private secretary.

After graduating grade 12 in 1964, working, getting married at age 22 in November 1967, my husband started his own heating & air conditioning company. I worked for him, had 3 children from 1971 to 1975, and started Registered Nursing Training at age 39 the University of Alberta, moved to Ontario, finished in Ont.

I have been to McKay Avenue School many times since it became a school archives. Unfortunately the desks portrayed were not used on main floor elementary grades. Our desks in grades one to six on the main floor were dark wood with ink well holes. Desks were joined together back to front. Tops did not lift up but rather books were stored on a shelf under desk top.

Another difference from the archives is the HOME ECONOMICS ROOM. Too bad it isn t set up because that was an important part of our education and is now an omission in today s education. I would like to draw a diagram one day and submit it. The room had 4 stations in the cooking area. Sewing machines were in the middle of the room. There was a bed form proper bed making near the south east wall. There was a pseudo fireplace on the north wall. In front of it were four sofa type chairs with coffee table in the middle. Here we had to serve a tea to a principal or vice principal. 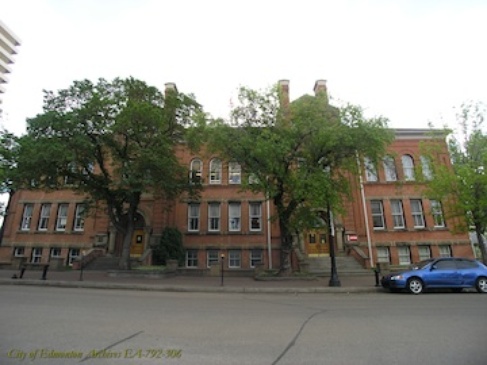 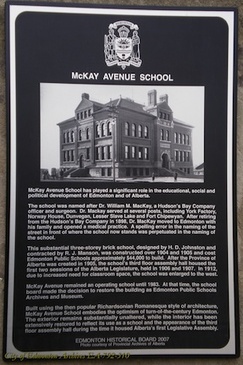 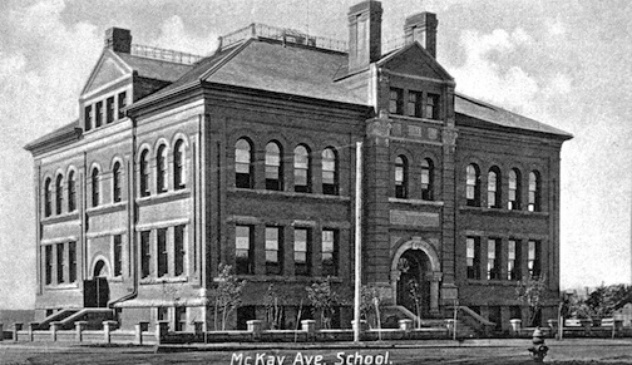 Provincial Archives of Alberta A.2489 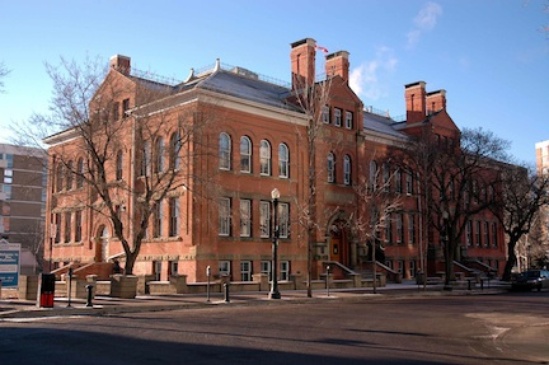