The Pavillon Lacerte, Campus Saint-Jean of the University of Alberta on Rue Marie-Anne Gaboury was established by the Missionary Oblates of Mary at this location in 1911 as a juniorat, an institution that prepared young men for the missionary life with the Oblates.

Created in Pincher Creek by Father Albert Lacombe in 1908, the institution was moved to this more central location beside Mill Creek in Edmonton. It continued its original purpose, but also became a boarding school for young men. It became a college in 1941 when the Jesuits closed their establishment. There have been many reconstructions and additions to the building since then and women finally began to be admitted around 1960. In 1970, the college became a faculty of the University of Alberta.

Two of the older buildings remain although they have been renovated. The former chapel/school/residence is now the Pavillon Lacerte. The former chapel has been transformed into a museum, a reception area, and offices for personnel. On the west side of this building is a grotto built of fieldstone with statues of the Virgin Mary and of Bernadette Soubirous. This shrine was built by Oblate brother Antoni Kowalzcyk (1866-1947) who worked for over 40 years with this institution as a gardener, chauffeur, mechanic and all around handyman. He had lost an arm in an accident at Lac La Biche Mission while working on a sawmill and was known as somewhat of a miracle worker.  A bronze statue of this saintly man has been prepared by Edmonton sculptor Danek Mozdzenski and will soon be placed by the shrine. 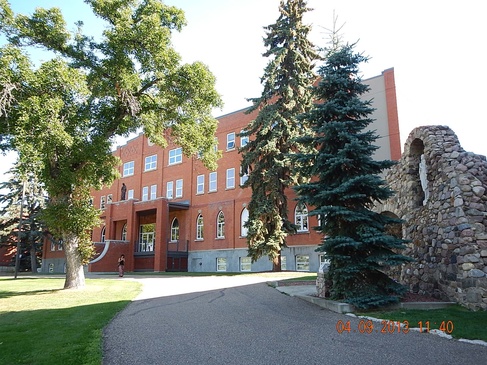